300 W. Main Street Is Under Contract 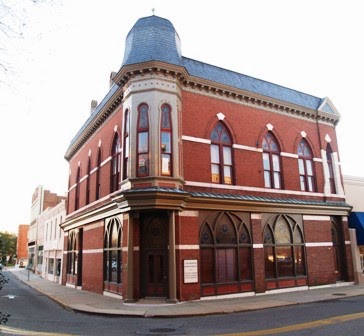 While some were told I had sold my building and it was under contract a few days ago, I personally did not sign the agreement until yesterday.

I am very excited for the new buyer, also from Delmar. Like any contract, there are still some basic hurdles to get over but as things stand right now it's a go.

So what will be going into this incredible building. I am pleased to say that the new Owner will be putting in a very upscale Wine Bar, perfect for this location. They will be under construction over the next two or three months to recreate the 1st floor and you can expect to see Micro Brews there as well. They will also be serving lite fare food.

The new Owner explained the inside layout to me and it will be very cool. I'll leave those details for he and his Wife to share with you when the timing is right.

I'm excited to see yet another step forward in the RIGHT direction towards properly revitalizing Downtown. There will be NO Dance Studio going into my building, that's for sure.
at 1/26/2014 08:00:00 AM

It's too bad that there can't be any daytime businesses downtown. Having to constantly run back to where you parked to feed the meter just makes me not want to go there unless it's a weekend or after 5.

anonymous 12:20, There's a 2 hour FREE parking lot Downtown for day time use. There USED to be plenty of day time retail Downtown but guess what, people like you refused to support them and they all went under or moved to the Mall.

You should be excited. There are a LOT of people/couples who would like to go out and enjoy an evening in a relaxing lounge with a special of wine and relax.

Embrace the positive steps forward and IF you are into daytime drinking and refuse to walk from the 2 hour parking, bring lots of quarters.

This is really good news. We love the wine bar in Berlin, so it will really be great having one just minutes away.

They're also proposing a Cigar Club in the back of the building. Very Cool!

Joe, what's the issue with the dance studio? While I would not have chosen to move there if I were the owner (lack of close parking), it is still a business moving from the city of Fruitland tax base to the City of Salisbury tax base, why is that a bad thing for downtown?

anonymous 12:56, I have nothing against Dance Studios, I just do not believe that is a great location for what is planned for the Plaza.

Jim Ireton and Jake Day have embraced my ideas for the Plaza but as I have stated many times, they are putting the art before the horse.

Do you think it's a good idea to have children coming and going in an area that could be filled with adults enjoying alcohol?

Nevertheless, know that there will soon be a LOT of empty space at the Mall and perhaps even more space becoming available in the near future.

You also have to ask Ireton if this Studio will be TAX FREE????? Things that make you go, hmmmm.

The dance studio will bring families downtown that will help support retail and restaurants. Maybe it will be enough to actually support a family restaurant down there instead of yet another watering hole.

IF BARS and brew pubs could make downtown Salisbury a hit then it would have happened years ago with Brew River, and several others that are already in place and have been there for years and years. This is a losing idea. I wish it were not... but it is.

Joe if you could please explain your thoughts on this I'm kinda at a loss here. You don't think a dance studio would go well with what's in the works for downtown with having children around clubs and all . I can understand that and it makes sense. Now if I remember right you are against having a new public library built in a new location. So what gives? Have you given any thought about what should be done to tackle this issue? I would like to here your input on this. I for one am all for your idea for downtown. I've seen this done before and it worked well. My only issue is having a public library in the middle of party central. I'm willing to bet jimmy boy himself has overlooked this issue. If he has looked at it and sees no issues I would find that extremely disturbing with his background working with children.anyways I would like to here your input on this issue sense IMO your ideas on how downtown should be dealt with are right on point.

Just what Salisbury needs some dance studio. We already have a fairy as a mayor. Why are Fake Day and the worthless city council pushing hard to make the city of Salisbury an arts district. But people had a chance to vote for Joe as mayor someone that could have brought true leadership to Salisbury. Instead they vote for people that don't know their head from their a$$

"But guess what, people like you refused to support them and they all went under."

Joe, I know for a fact you're not this unkind to people face-to-face. You sound like a real jerk here! I don't understand why the "attitude" is needed.

Is this the breaking news? Just curious?

anonymous 2:52, is your name JT? I ask because, quite frankly, that's a stupid question/statement. Are you just trying to purposely make me look bad?

There were retail businesses on the Plaza and they closed down because the people no longer shopped there.

Just what is so harsh about my statement.

anonymous 2:24, I don't get you people today, with all due respect.

The Library is NOT on the Downtown Plaza.

Your question, (again, with all due respect) should absolutely 100% be directed at the MAYOR for selling the Firehouse KNOWING they are going to put in a hip/hop/Rock&Roll style bar in that building.

anonymous 3:56, NO, this is not the Breaking News.

anonymous 1:13, YOU are flat out WRONG. I will add, if the Mayor and Day continue to let just anybody open up on the Plaza the Plaza will fail again as well.

anonymous 1:11, uh, ok. Well, just how many restaurants have to come and go before you realize your theory is complete BS.

Downtown isn't coming and neither is the shore... Won't happen

if i had the money and desire to run a business downtown, i would have put in a daytime business that caters to everyone. pm time and men and high end items only are limiting.

a cigar room was ideal in the Elizabethan and Civil War times. today we are more health minded.