Why Albero Should Be Salisbury's Next Mayor 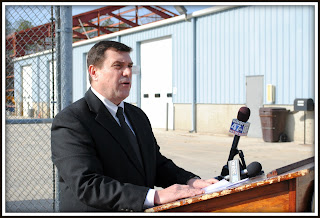 Salisbury has been in the economic 'doldrums' for most of the recent past.  Many can argue that this condition can be attributed to crime, poverty, hostile business environment and so on.  But the bottom line is this - do you think you are better off today than you were 4 years ago?

As an independent journalist that publishes many articles for SBYnews - I will admit that there might be a slight bias toward Albero for Mayor.  But when one closely examines the record of the current administration, one can only deduce that Joe Albero is the right man for this job.  From my own personal experience in my daily interaction with him -  his grasp of concepts and facts relative to our local economy is on target.  He is keenly aware of all of the following:

I'll tell you something else about this gentlemen - he has personally paid a tremendous price for taking a stand against abuses inflicted upon us by our own government.  Whether it be the Salisbury Waste Water Treatment plant and/or other illegal waste water discharges - his vision for a clean environment is second to no one.  And one more thing - I can guarantee you that if Joe Albero is elected as Mayor - he will not waste time in assembling an economic development team to help address some the economic conditions that have afflicted our community.  In fact - if I know this man -(which I believe I do) - he already has a development team in mind even prior to this election.

I say give this man the 'gavel' and let him go to work.  The time is ripe for Joe Albero to become Salisbury's next Mayor.  I encourage all - (rich, poor, black, white, male, female, or others, hispanic, asian, etc.) - to get out and vote for him.

Amen - Brother. Well spoken. I say the sooner we the people can get him into office - the better off.

I know I would not want to be one of the obstructionist to his plans for a better Salisbury - even the Governor.

DITTO. He really is the right man for the job.

Joe you have my vote.

Go Joe all the way to the State House.

As Sylvester Stallone would say, Go For It. I'm all in favor of some change.

What I would really like to see are some unbiased endorsement of Joe. Who does the fire department endorse? Who does the police endorse? Why dont any of the main stram media even really cover this election? Are the TV stations staying away so Joe doesnt get exposure? Unless Joe can get exposure to non internet related ads... he can not win.

I sure hope he wins for the sake of all Salisbury. It can't get much worse than it already is. Go Joe!

I have faith with a change in leadership the City will move forward I hope everyone remembers that the best plans will bring some prosperity to Salisbury but not over night we as a city are competing with 50 other states looking to get a solid foot hold. I have no doubt we will move forward but not with Ireton or his puppets around

And just what does that mean?

Seriously? Are you for real!! The fire department? unbiased? Did you know that the International Association of Firefighters helped buy Obama's two elections. Firefighters are only concerned about 1 thing. What politician will get them the most money. It's all about unions and pay checks.

7:08, in case you haven't noticed, (Jimbo) Joe IS the Main Stream Media in this town!

LOL! You just can't STAND it, can you!

Joe, you have my daughter's vote as I live 500 feet outside the border!

Well for one, The DT cannot get much thinner or it will be blown away when it is delivered. We all know that the DT is going to route for Ireton as it has always had a liberal slant.

FOX on the other hand - will go for Joe as he is the people's choice. Joe has no agenda except to try and move Salisbury forward according to traditional american ideals. So who am I leaning with? I am going to vote for Joe - plain and simple.
Now - where do I send the check.

If I can be guaranteed he will settle the fiasco with the city council he's got my vote if there is a new fire chief.

The question should be: Why Shouldn't Joe Albero Be Mayor of Salisbury? He Is The Best Candidate For The Job, hands down, Not you Jimbo, you keep your hands to yourselves.

Jimmy only came through on what was a handout, and was looking for more, sucking people along thinking it was "free money."

We need a mayor who is focused on leading Salisbury out of waiting and being satisfied with scraps from the state and feds, a mayor who can market Salisbury in a better way than paying for empty accolades, while whining that the council is at fault for everything.

The Daily Times pimping on the fire chief thing got Joe my vote.

Hope you are happy, DT.

He has impressed me so far. I say give him a chance. I think the sooner Salisbury can change direction, the better we will be as a community.

So you are going to stop a nationwide trend.Little mister mayor you might think you change Salisbury but I think you are dreaming.

I could not agree more. Joe has a plan of attack. Unlike Ireton - his action will be decisive and not reliant on federal and state give-a-ways. I say let's hand over the reigns and let him try.

Jim Ireton should be re-elected , he has shown his potential.
He will lead this city into a full Getto experience. That is what we need to give this city a re-born attitude.
We have learned to embrace gays , forgive criminals and hire the unqualified.
We are now at the bottom of the barrel , where else can we go but up hill.
One other thing , do we have a police force in the city? I don't think so. The Sheriffs dept. responds to most calls. Thanks Mr. Lewis for your protection.
Anyway , since this city has fallen to rock bottom , I would expect Mr. Albero to win hands down. However , our the city residents are mostly idiots with entitlements .

The local media hasn't changed, they stay away from local politics. They did very little to help Ireton get elected, Ireton used this very blog outlet to get his message out. Too bad he didn't keep promises.

If local media actually had investigative journalists, they would gather all of the requirements for the fire chief job per state mandate, and inquire Hoppes' credentials, and if he does meet the requirements they should report it, yay or nay.

Years ago I worked at a county department and wrote many letters to the Daily Times, letters to the editor to expose the thefts and my letters were never published. Nobody ever tried to contact me for more info, they didn't want anything to do with it.

If the paper had used the free info I fed them they could have broke that story, and I'm not talking about bust Mike Lewis made, where I was working was never reported. Two employees were discharged, the rest was swept under the rug to be buried forever!

Yep - good article. Definately a time for change in the bury. I sure hope he wins because the path we have been going down is just that -downward.

Do you live in the city of Salisbury Beezer?

I don't understand the whole city/county thing.For law enforcement purposes the in city county streets should all be considered city.Deciding who should respond to where should not be as confusing as it is.For instance,South Park Drive is situated in town,but is a county street.That's just one of many examples that cause a delay in police response.

To 11:11 AM - I used to think the same - until I saw the city/county boundary lines. You would not believe how they weave-in and bob out. On one side of the street is considered city and just across the street is county.

From reading the reviews on this blog I believe Salisbury is about to have a new Mayor. Although I live in Delaware, Salisbury is already looking more appealing with the prospect of Albero as Salisbury's new Mayor. Who knows - in a few years I might decide to move back into MD.

Beezer, your article shows how much of a grasp of facts you and Joe don't have in my opinion. The items you cite show no understanding of problems facing the city. I can cite figures about bridge engineering, but it doesn't make me qualified to build a bridge.

Many of the figures you site are a result of an environment that people at the local level have little control over. You can argue the mayor can make it a more business friendly environment, but it takes more than that to lift Saliabury out of the current situation.

Saliabury has few high skilled high paying jobs. Globalization and Salisbury not being close to Interstates and other modes of transportation are more to blame than any local politician. Until the city maximizes the resources in Saliabury (such as SU as an incubator for economic expansion) it won't change.

Your list of businesses that you like to publish fails to face reality. I'm sure you will be adding Zia's to the list despite the owners saying it was the chain restaurants. Several others, like Dresser, are not due to local conditions but corporations using cheaper labor or poor business decisions forcing them to cut low-profitable plants. If this city was really concerned about local business, they would be using there services instead of the chains. With greater demand, these local businesses would be moving closer to economies of scale, allowing them to pass along savings to the locals. Does it happen though? Heck no. Saliabury has only themselves to blame, not the mayor, not the council.

Guess what, everywhere has seen poverty rates increase, regardless of what party is control of the state.

These are some sobering facts. I sure am glad that I am not the incumbent mayor running for reelection.

If you really look in-depth at both people, Joe is the most qualified for the position. His entrepreneural spirit is what is most important for this office. Things like balanced budgets, realistic budgeting, fair wages, all of these things are more condusive to Joe. IMHO - I hope he wins.