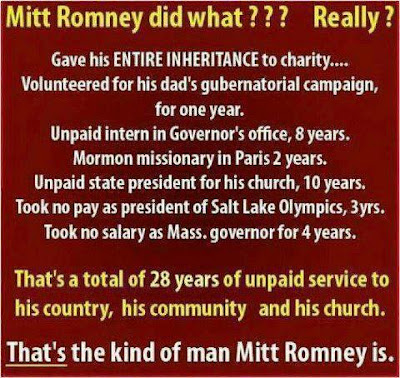 obama
lived off others money for years.
never "had a real job"
never met a payroll
has no real leadership abilities; unless of course you want to count the community organizing he did with the crooked, deceptive, now defunct and reopened under "new Names", acorn.
again; truth - what a concept
character does matter...

However,
If I had millions of dollars in oversea banks collecting interest, Never having to work one hard day in my entire life and paid at less 14% in federal taxes; I would probably be able to do the same thing.

237-Mitt graduated with a dual degree early, in what is considered the toughest program in the nation. He GAVE AWAY HIS ENTIRE INHERITANCE. Every dollar he has, is a dollar he's earned. Why should he pay more? Do you own any stocks(btw-the stock market has created more wealth for the everyman than any other creation)? Do you believe, like Barack Obama proposed in his most recent budget proposal, to increase the dividend tax by 300%? So you believe we should tax, post-taxed money, at regular income levels?

The man earned his money and invested it wisely. In addition to his 14% he pays in federal taxes, he donates approximately the same amount to charity, where at least he knows the money will go to helping people.

I think you and your liberal friends are just jealous of his wealth and are either unwilling or incapable of working hard enough to improve your station in life.

Unlike your liberal heroes, the Kennedys or John Kerry both of whom inherited or married into their wealth Romney earned his money.

When a person who works for their money, saves, and invests then the obama world wants to crucify him. I say congratulations on your success. I'm not jealous, maybe, just maybe I might actually learn something positive from him for myself and my family instead of gutter smear tactics.

And he is not the only one of these "rich" people who the government and some citizens say should pay more taxes that give so much to charitable organizations. These organizations probably don't waste as much as our Federal and State Governments. Even us lowly Middle Class folks support the thousands of charities in this nation, and pay ourrageous taxes as well.

Mitt has character, and is a morale person and that is certainly more than what is taking up space in the White House now!

Remember, Obama is a millionaire.
After years on the Government payroll.
NOT as a community organizer or attorney for ACORN but as a bottom feeder scrounging around Chicago with thugs, lowlife's and communists.

There is no comparison between these two humans as to who has earned a better reputation in life for himself, his family (at home or abroad)and all the people around him.

Mr. Obama, I know Mitt Romney. He is a friend of mine. You're no Mitt Romney!

2:37. check your facts. You must be reading move one or something equally brain washing.

Mitt & Paul change and hope you can REALLY BELIEVE IN

Let's hope Mitt can change the tax laws so that people will want to invest here. It's a legal business decision that's used by democrats too. Like only the republicans are rich and elitists.

Can you blame billionares for NOT investing in USA banks? Too big to fail? They all tanked. Real Estate, tanked. US car manufacturers, tanked.

All democrats want to talk about is outsourcing by Bain Capitol. Romney saved jobs too, it wasn't all slashing jobs and cutting budgets.

Bain Capitol invested in Staples Office Supplies and made them a huge success, Domino's pizza, just to name a few. He also did it all within a budget.

He's already volunteered countless hours of civil service for nothing, and was successful on his own at the same time. Hate a man for being and smart businessman and and being successful.

Success is something we need dearly. Bush was a failure in business, Texas Rangers, Harkin Oil. Romney should not be painted with with a broad brush to resemble George Bush in any way.

11:57 have you ever worked or started your own business? if you did or do have a job is it a "government" job? were you educated and indoctrinated in government schools. do you have a screw loose? does your toothpick come out clean? does you elevator go to the top? it seems as though the lights are on, but no one is home.
you sure didn't take any economic courses, and you don't understand how business and investing works.
you sound like joe biden because of your ignorance regarding these issues.
remember being successful is a Good Thing. it helps everyone.

"Anonymous said...
Ignorant. That's laughable. You guys are ignorant. Giving your entire inheritance to charity is the biggest scam for a tax write off."

Really? Please explain how giving your entire inheritance to charity is "the biggest scam for a write off?
I don't know the exact numbers but giving away 100,000's of thousands of dollars to avoid a few percent in tax or to take a few percent tax break is not ever beneficial to an heir in terms of taxes.

Also to the "offshore bank account" commenters-The benefits of offshore banking is greatly exagerated. The only benefit comes if you give up your American citizenship such as one of the founders of Facebook (can't remember his name) did. The fact is you must still report to the IRS interest from foreign accounts which is taxable.

"Also to the "offshore bank account" commenters-The benefits of offshore banking is greatly exagerated. The only benefit comes if you give up your American citizenship such as one of the founders of Facebook (can't remember his name) did. The fact is you must still report to the IRS interest from foreign accounts which is taxable"

I don't think this is anything new because I know for a fact that many wealthy Americans were renouncing US citizenship and becoming citizens of the principality of Monaco as far back as the late 60's- 1970's to avoid taxes which forced Monaco to create stricter naturalization requirements. Then the "trend" was to become a British citizen.

I don't know about others and their charitable giving but never ever has the small deduction we get in taxes an incentive for us to donate. In reality it would be better financially for us to keep the money and pay taxes on it. We see it as we would rather give our money away to causes we feel strongly about and really need our help than to give it to the government and see them give away to companies like Solyndra. If the upper income earners were taxed more it would be less they would have to give to hospitals, schools, and other charities which would force alot of charities to close down and the govenment to give more to schools and hosipitals.