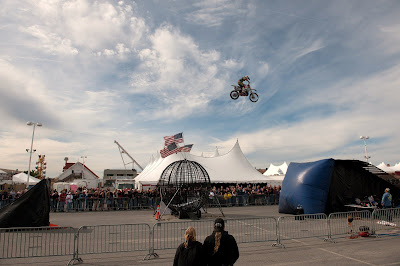 OC BikeFest will take place on the same grounds and setup as Sunfest, including its two stages that will play host to three classic rock headliners. Jackly with Jesse James Dupree will rock the stage Sept. 13, 5:30 p.m., hop on the Grand Funk Railroad Sept. 14, 5 p.m. and get your fiddle on with the amazing Charlie Daniels Band Sept. 15, 5 p.m.

You can also find even more music at the Convention Center location where Jackyl and 38 Special will rock the Jack Daniel’s stage. Other acts throughout the weekend at both locations include The Rowdy Johnson Band, Kashmir - the nation's #1 Led Zeppelin tribute show and Messenger.

In addition to great music other attractions include, TRU TV’s Full Throttle Saloon’s Michael Ballard and Angie Carlson, the Jack Daniel’s Experience, a mobile museum bringing a little of the distillery from Lynchburg to Ocean City.; The Wall of Death, an extreme motorcycle thrill show; Ball of Steel stunt show and the Adrenaline Crew, an American stunt team out of Los Angeles, and the Extreme Trials Showcase featuring Tommi Ahvala.

Attendees (21 years and older) of the 2012 OC BikeFest are eligible to enter Loaded Gun Customs, Custom Vintage Bike Giveaway. The drawing will take place following the Charlie Daniels Band concert on the Ocean Stage at the Inlet on Sept.15. The motorcycle is on display at the main entrance of the Casino Ocean Downs.

Happening simultaneously with the DelMarva Bike Week, which annually attracts more than 120,000 motorcycling enthusiasts to Salisbury – the OC BikeFest offers visiting bikers and many others, an opportunity to head down to the ocean to enjoy stunt shows, custom bike builders, a motorcycle vendor mall, food tents, Budweiser and Jack Daniel’s Pubs, shops, rides and the fabulous bars and restaurants in Ocean City.

OC BikeFest organizer Cliff Sutherland says he hopes to attract families and motorcycle enthusiasts who are ready for a good time. Sutherland is quite familiar with the Maryland beach, as he has vacationed in Ocean City for 40-plus years. A frequent participant in Delmarva Bike Week, he became concerned over the event’s western migration, so Sutherland met with Ocean City officials and brought the inaugural rally to the coastal city in 2011.

“What we’ve done is created a high-end event for Ocean City,” he says. “Our rally will probably be 60 percent motorcyclists and 40 percent other folks,” Sutherland adds. “We do all types of music not just your ‘traditional biker’ music. We aim to attract everyone.”

He says the average biker is 52 years old and makes about $94,000 a year. He adds that their bikes don’t come with trunks and attendees will spend most of their dollars in local restaurants, retail stores and hotels. Sutherland says he is expecting at least 20,000 visitors this year.

Hours vary by location and can be found at www.ocbikefest.com
Advance passes are available at Rommel Harley-Davidson and Rommel’s ACE stores. Admission allows attendees to come and go as they please for all four days. 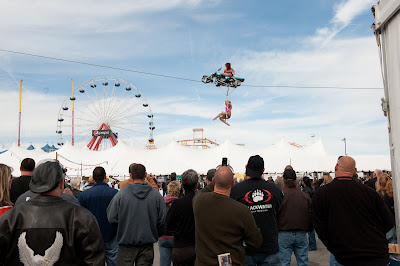 I refuse to spend money just to shop for motorcycle accessories.. why spend your hard earned money when you can ride around the county and go to plenty of places where everything else is free. this promoter has lost his mind 25 dollars per person just to walk through the inlet parking lot.. this is exactly reason why a lot of people are not returning to the area for Bike Week because of this kind of bs.. it's bad enough that we have to charge of anywhere from 100 to 200 dollars a night just stay here but we have to keep getting into the pocket while they're here.. eventually even these guys are going to run out of money...

Looks dangerous. I guess from skateboarding to motorcycles.
They are young!

9:30
you arent a real Harley owner. You cant hardly afford the bike let alone buy anything for it. And the 25 dollars is for all week not just one day. Stay away cause your jamming up the road


If you can't afford to attend move over for those of us can and want to attend.

Anonymous said...
9:30
you arent a real Harley owner. You cant hardly afford the bike let alone buy anything for it. And the 25 dollars is for all week not just one day. Stay away cause your jamming up the road

Must be one of the promoters. Don't be such an A$$!

If you can't afford to attend move over for those of us can and want to attend.

Must be the same promoter posting at 10:33am.

4:21 and 4:22
same jerk and no im not a promoter but if you buy a 10,000 min to 35000 bike and you can afford 25 dollars for all week then you cant afford the bike PERIOD dont be crying i cant afford it its a toy toys take money stay the hell home