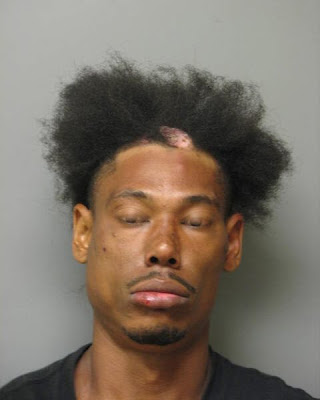 Location:
I95 Northbound in the area of Basin Road (SR141), Wilmington, DE

Resume:
Wilmington- Troopers have arrested a 31 year old New Castle, DE man on weapons charges after he assaulted a Trooper in an attempt to flee from custody.

The incident occurred after a Delaware State Trooper on routine patrol was dispatched to a report of a disabled vehicle with the occupants walking on the shoulder of I95 northbound in the area of Basin Road. Upon arrival to the area, the Trooper observed 2002 Buick Rendezvous parked on the left shoulder and a subject, later identified as John N. Escobosa-31 of New Castle, and an 8 year old male child walking on the shoulder away from the disabled vehicle. The Trooper contacted Escobosa who advised that his vehicle had run out of gas. The Trooper offered to transport both Escobosa and the child from the interstate and to a gas station where they could get assistance. The Trooper explained to Escobosa that he would need to conduct a cursory pat down search prior to allowing him into the patrol vehicle, and asked him if he had any weapons in his possession, in which Escobosa claimed he had a knife. The Trooper attempted a pat down search to remove the knife from Escobosa and felt a handgun, later identified as a Smith and Wesson .380, concealed in his pants pocket. The Trooper was able to remove the gun from Escobar’s pocket, and place it on the patrol vehicle outside of Escobosa’s reach. A physical struggle ensued as Escobosa actively attempted to resist arrest and flee from the Trooper. Responding Troopers arrived and assisted in taking Escobar into custody.

Further investigation revealed that Escobosa was in possession of the Smith and Wesson .380 caliber handgun, brass knuckles, and two pocket knives. A search of the vehicle located 2 spent handgun shell casings and a police style baton.

Escobosa was charged with the above crimes and committed to Howard R. Young Correctional Institution on $16,202 Secured Bond.

The Trooper received unspecified injuries as a result of the struggle and was treated at the Christiana Hospital Trauma Center and released.

The 8 year old male child accompanying Escobosa was identified by Escobosa as his stepson. The child was not injured and was turned over to relatives.
at 8/29/2012 03:55:00 PM

wow. now THAT'S what a bad day looks like. YIKES!


Who would have thunk it. He seemed so normal.

Another case of the Trooper should have shot his butt. Guarantee he will never become a asset to society.

How would like to introduce him to yo mamma.

Bad guys always have a unique look. For example: Look at Barrack Obama and Joe Biden or for that matter Nanacy Pelosi or Hillary Clinton...all scary looking crazed persons!

He needs to look worse in his next photo op.

Is that an ear on his forehead?

His mother is soooo proud!

He is normal. Just had made a bad judgment call that day.

So harsh hope u dont have a man, son, brother or anyone who will bw having a hard time and makes a stupid call. SMH He did not kill any one so why would he deserve to be shot in front of his step son.