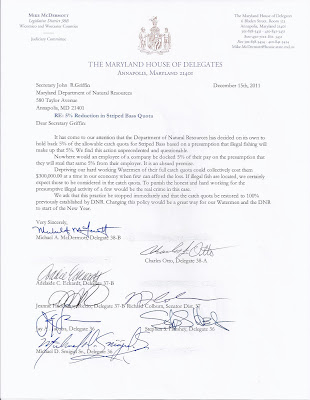 The rebounding of the Striped Bass is a great success story. The fishery is healthy and robust at a time when news coming from the Bay has been a mixed bag. In an effort to “protect” the fishery, the Department of Natural Resources is going beyond what many would consider “reasonable” when it comes to quota enforcement.

Quotas for species are set prior to the beginning of a season and commercial watermen adjust their budgets accordingly (as any business owner would do). When the quota is reached, the fishery is closed. Only within the past few years has an illegal catch (poached) discovered by officials been counted as part of the total catch quota. This makes sense as it is the fishery that is being depleted and the resource should be protected and counted as part of the quota.

What is disturbing is the recent action taken by the DNR and Secretary Griffin to limit the quota to 95% of the original set catch amount. This was said to be done in response to the presumption that thievery and poaching is occurring, though it may not be detected. This anecdotal response by Sec. Griffin is not the scientific, thoughtful estimates that the General Assembly has come to rely upon and, as such, is troubling and offensive on many fronts.

The 5% reduction will cost our commercial watermen about $300,000.00 out of pocket in lost revenue. This is multiplied in our local economy to represent a loss of approximately $1 to $1.5 million when you factor in losses faced by the processing and support industries. This at a time when we need every dollar for jobs to be maintained on the shore.

Removing actual tonnage of fish taken illegally is not based on an assumption...it is actual, proven loss to the fishery. To claim a 5% presumed loss through theft by the commercial watermen and punish them based on that assumption is ludicrous. How would we accept it from our employer if they docked our pay 5% based on their assumption that some of their employees may be stealing from them? We would cry foul and demand those wages be restored!

The Watermen approached the Eastern Shore Delegation and requested our assistance. I crafted a letter and submitted it to the entire delegation for their concurrence and signature. Only a couple elected not to sign onto the letter. I spoke with Sec. Griffin and listened to his reasoning, but I found nothing scientific in the decision. I asked him to rescind the order and allow the original quota to be harvested or at least consider a modification to the 5% figure.

I have supported much of what Sec. Griffin has tried to accomplish, but it is prudent to demand that these decisions be based and supported by science and not anecdotal evidence to the contrary. I hope his decision will change, but if I were a commercial waterman, I’d budget for the 95%.

Whose names were whited out?

I still think it's outrageous that MD tax payers need a fishing license.

If I were a professional politician, I'd need 95% of my pay cut to make up for the "assumed" graft and corruption that comes with the job. After all, I bought this 4 year x 150k job for the 20 million dollar campaign it cost me!

On January 2, 2011 at approximately SFD dispatched for a natural cover fire at the SHA complex on West Road. Engine crew found DNR Natural Resources Police boat on fire. It's a state holiday and no one should be behind the gates. MSP also on the scene.

Some watermen have chosen to be poachers.
The DNR has limited amount of officers to enforce these laws.
They expect other watermen to help and teach these idiots a lesson , however , all will suffer.
Having been a watermen for many years , I agree with this decision , most of the guys I know
say it won't affect them anyway.
Sit down and enjoy another beer!

Yes, sit down and have another beer. Pay no attention to the fact that the government controls every aspect of our personal and business lives. From the time you open your eyes in the morning until the time you close them at night. What lesson do you expect "other watermen" to teach these guys 5:48? To let the government step in and run your lives? To become a complacent sheep and let socialism and tyranny establish an irreversable foothold in this once great nation? Move on to some third world socialist nation where people don't know any better than to get down on bended knee to the oh mighty tyrant.

You lost me at "The rebounding of the Striped Bass is a great success story. The fishery is healthy and robust"
Delegate McDermott must be stuck in the year 2003. The vast majority of Bay striped bass are SICK and will DIE from mycobacteriosis. Everyone knows it and it is indisputable.
You can argue until you're blue in the face about how much poachers do or don't take (I personally think it's way over 5%, but that isn't my point.) My point is, when are politicians and fishery officials going to stop throwing rose petals in self congratulatory bs about a fishery that is in desperate condition?