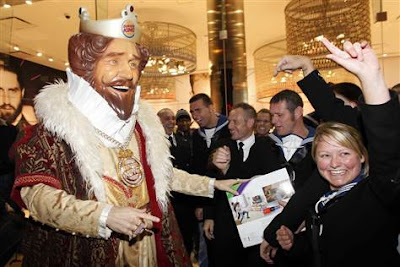 Struggling chain will instead focus on selling food to moms, report says

As part of a plan to reinvent itself over the next year, fast-food chain Burger King is about to dethrone its creepy King character.

The struggling burger chain is planning to ditch the odd character who has starred in its recent television campaign — plus other wacky marketing targeted at teens — and will instead focus on selling its food to moms, according to a report in USA Today.
More
at 8/19/2011 09:00:00 PM

I always thought he was creepy.

Who came up with this freak idea anyway?

His photo is on the Sex Offender web page!