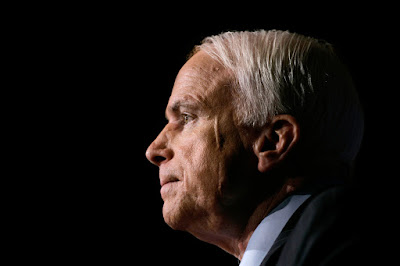 McCain leaves behind his wife of 37 years, Cindy; seven children, including three from his first marriage, to Carol Shepp; and his 106-year-old mother, Roberta McCain.

Perhaps America's most famous prisoner of war, the former Navy pilot with a famous admiral father was shot down over Vietnam and spent 5 1/2 years as a POW in the north, most of that time in a prison sarcastically termed the Hanoi Hilton for the way inmates were treated.

Only because his father and his grandfather were high ranking Navy admirals. Protected by TPTB in the USS Forrestal fire and the Keating 5. Just a RINO version of Clinton. Hopefully he is at peace now.

God bless and farewell Senator. While I may not have always agreed with you, my respect for your courage and patriotism shine the light on what we should all strive for in service to our God and country.

I'm trying to be nice and respect the dead, but he was a Traitor and you can't deny it.

The sad thing is the libtard, Left Wing Nut Media is trying to portray him as an American Hero and that is only because he is a RINO and Trump said the truth about him.

Memo: The media are also Traitors.

McCain turned into a bitter hateful old man towards his end. That is his legacy.

I can't stand McCain. He was vindictive and his true colors came out at the end when he cast his vote against repealing obamacare. He was a liar who could care less about this country. He cared only about getting back at the President. Then when he made a show out of saying the President wasn't to come to his funeral he sunk to the lowest ever.

Ol guys, we get it. Everyone undersrands your mantra now: "think like me, or else you are an evil traitor nonAmerican"

1. His father was a key player in the attack on the USS Liberty.
2. He would have been dishonorably discharged for causing an explosion aboard a ship if it werent for his high ranking father.
3. When captured by the enemy he sang like a canary.
I can go on and on but for these 3 I can tell you that the world is a better place without him. And for those who think you shouldn't speak badly of the dead, I only do it towards the people who were scumbags in life.

Hardly a patriot or a hero. He epitomized the phrase Swamp Creature. His time in Congress was spent not ever for the betterment of the American people but for the betterment of his own pocketbook and at the expense of American military men and women's lives. He will not be missed. I could care less "talking bad on the dead." It is what it is and there is no sugar coating it.

Don't be ridiculous. No one ever said for anyone to "think like me, or else you are an evil traitor nonAmerican" but if the shoe fits.......
Seriously though name one thing he had done in his time in Congress that wssn't self serving. He was such the great patriot and hero he wouldn't even do anything to help the VA crisis. That because there was nothing in it for him. He may have had you fooled but no one fools me and I am not going to lie for anyone especially a bitter hateful jealous 2 time loser old fool who spent the last years of his life making an ass out of himself.

Sorry, but good riddance, for the GOP. Now get him replaced ASAP!

John McCain is a perfect example of white privilege along with the Bush clan.

You must have a very low standard for what constitutes a hero.

Next man/woman up please. A seat needs to be filled!

Notice how the swamp is praising one of their own, left and right. Yet the country HUGELY trounced him from being president. The people didn't like him, yet the GOVERNMENT loved him, especially the left. Not my hero, not my congressman, and not worthy of my condolences.

Byeeeeee
Did you give back that million you took from the Saudis ? TRAITOR.

Must be a Libtard. Why do I think you couldn't stand McCain at one time!

Anonymous said...
John McCain is a perfect example of white privilege along with the Bush clan.

White privilege? Only a F'n Liberal Douche Bag would say something like that.

Anonymous said...
Notice how the swamp is praising one of their own, left and right. Yet the country HUGELY trounced him from being president. The people didn't like him, yet the GOVERNMENT loved him, especially the left. Not my hero, not my congressman, and not worthy of my condolences.

Most of your statement is accurate, but there is enough evidence that the Democrat Party rigged the election for Obama to win and also in 2012. In 2014 they got caught rigging the DNC Primary against Bernie Sanders. Wake up before it's too late.

You must have a very low standard for what constitutes a hero.

John McCain has been ill for a very long time. He should have stepped down and let the Republican Nominee take his seat.

The Governor now makes the appointment and I believe he should do the best for the Party, the State and the Country and appoint Dr. Kelli Ward who is a current candidate for the Senate Primary. Appointing McCain's wife would be a disservice to the Party.

Democrats can't believe their good luck to have McCain die now. It took the focus off the murder of Mollie Tibbetts by the illegal alien.