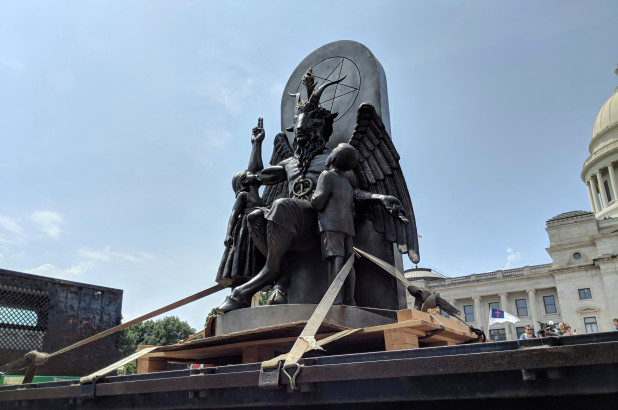 A large Satanic statue featuring the goat-headed deity Baphomet was unveiled during a protest at the Arkansas State Capitol.

The Satanic Temple placed the bronze statue at the capitol during a First Amendment protest on Thursday, while calling for the removal of a Ten Commandments monument permanently mounted on Capitol grounds.

“If you’re going to have one religious monument up then it should be open to others, and if you don’t agree with that then let’s just not have any at all,” said Satanic Arkansas cofounder Ivy Forrester.

In response, they would like to install their 7 ½-foot-tall Baphomet statue showing the winged creature accompanied by two smiling children.

This is a time for all good men to come together and destroy this obscenity. Just the fact that this is allowed shows that we are now living in the end times!

All of the Ten Commandments could be interpreted as good ethics and legal education rather than religion. Satanic people believe in all kinds of non legal things , murder being the most sadistic .

how can we be sure that isn't hillary?

This offends me! I need a safe space and cry-closet!!!

They have the right to express themselves, and so do I...

This is fine, but Robert E. lee has to be removed? WTF?

I do not condone the statue or what it stands for. That being said, they have every right to display it, preach it, and to speak freely about it. The city obviously gave them a permit to assemble to do so. Good or bad, the first amendment protects them. We can not preach freedom of speech, accept when we don't like what they are saying. That would make us no better than groups like Antifa, BLM, Liberals..etc.

Go for it! But be warned that graffiti will be a problem.

7:21 AM - Add public health to that, too, with religious dietary laws.

I don't even give a shit but find that way spooky and obscene. We are in enough deep doo doo with out calling up demons with Idols.

Ignorance. Try doing a little basic research before you begin posting junk. They don't worship the devil. They believe in fairness and equality and being good. Typical sheeple, bible thumping followers.

6:56 Screw off! Enjoy Hell you moron! Yeah Satanism is the right path. Good pick defending these idiots. I don’t believe anyone in this world (including the Satan lovers) dont Cry our to God in those final moments when your at deaths doorstep. I’ve seen a devout atheist plead with God while on their deathbed. I will thump my bible! Enjoy the coals!!!

Wrong about the 10 Commandments. You said "all of them" could be interpreted as good ethics/legal teachings.

The first four you can totally throw out, each are about the insecurity issues that deity has.

Of the rest left... only two can be found in the law consistently - killing and stealing (which is not unique to Christian majority countries.. these are universal laws really). A third can SOMETIMES be found, regarding infidelity.. but these laws are not really enforced.

So no... the 10 Commandments have no real reason for being displayed other than as religious iconography.

You are also wrong about the Satanic Church.. you may want to look them up... they are really more atheist/humanist who believe in freedom, liberty, speech, human flourishing.. I think you will find that what your Church says about them is dead wrong. They are probably more accurately described as very successful trolls that are very adept at pointing out hypocrisy and calling out religious privilege when they see it.

Either you can't favor any religion on public ground and you permit this religious display... or you don't mix politics and religion. Super simple.