Maryland university board votes to raise salaries as much as $75,000 for three presidents 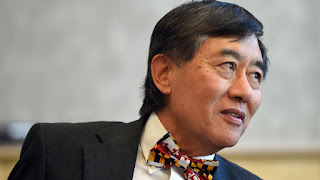 Presidents of three Maryland universities will receive raises of $75,000, $50,000 and $20,000 after a vote by the governing board of the state university system.

The Board of Regents voted Friday to award the three raises as recommended in a salary study by New York-based Sibson Consulting. The firm found Maryland’s university presidents were paid below their peers, with University of Maryland, College Park President Wallace Loh’s salary of $600,000 in the 43rd percentile. The board approved a $75,000 raise for Loh.

Representatives of faculty and students generally expressed support for the raises.

A.J. Pruitt, the president of the Student Government Association at the University of Maryland, College Park, said he believes Loh’s performance justifies a salary increase, although he would like to see resources spread elsewhere on campus as well.

The board of regents must think the peers are Ivy League schools, not a public University system.

So now a lowly Salisbury University public college president will be making what the commander-in-chief and president of the United States of America earns for his 24 hours a day, 365 days a year job? That's a ridiculous waste of taxpayer money. I'm sure she can't make that kind of money anywhere else. There's no way that job is worth that kind of money, if the President of the USA is not worth any more than that. She is not president of a country, and the budget she oversees, while undoubtedly a big one, is not a multi-trillion dollar budget. Her budget is chump change compared to Trump's.

Thieves looking after other thieves, just another gang of thieves robbing the taxpayers of MD.

Your leaders (spit the taste out now) won't raise the minimum wage for poor people, but they have no problem passing out
$20,00-$75,000 RAISES (f'ing RAISES!!)
for the elite among us.
What about the poor??
LET THEM EAT CAKE!!!

she also gets few housing, free cars and FREE FOOD.

This is one of the many reasons why the cost of higher education is out of control!

The whole university college system is a JOKE.Problem is the jokes on us paying for this crap with our hard earned tax $

If the governor of Maryland is in charge of all of Maryland, then why does he make about 1/3 the salary of one of his employees? So, who's the boss in reality?

Free food for the SU President?!
With this raise maybe she can afford Nutri System and get healthy

10:41,12:49...thank you for saving me a few words. I never have figured this out in the past years. How can most employees working under you make more money. It has been like this for years. A small college president making more than a governor running the state with many colleges and a president over seeing all the states. Something very wrong with this picture.

Not one petson in the world should make that salary! So overpaid it is crazy!!

That being said, she is already being grossly overpaid, before she gets the raise, for the position she holds.