Tangier mayor hopes that Trump call leads to a seawall 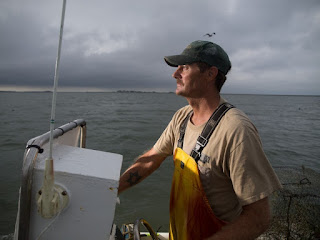 Tangier Island sits like a fishhook in the middle of the Chesapeake Bay, a fishing village known for its distinct local accent and eroding shoreline. Every now and again, it makes the news for a quirky event, like when the mayor found some oysters attached to a crab, or a tragic one, as when a longtime resident drowned.

Trump offered such reassurance after seeing a CNN report about the island, home to about 400 souls, many of whom trace their roots to three families that arrived from England in the 1600s. CNN’s Jennifer Gray reported that 87 percent of the island voted for Trump. Eskridge said he loved Trump “as much as any family member I got.” If Gray saw Trump, Eskridge pleaded, let the president know they needed help.

Another hit piece from a former writer for Baltimore Sun... Virginia should pitch in for the sea wall to be repaired instead of spending millions on lost elections. The sea wall is old and needs work.

OC should put ALL the $$$ they want to build walls in the median (ESPECIALLY NEAR SEACRETS) towards this effort.

Why you ask - since OC has nothing to do with Tangier's?

BECAUSE IT MAKES TOTAL 100% SENSE! Ocean City's City FAIL spends funds on USELESS stuff. This week, they begin rollout of trashcan's that have painted advertisements on them. Hmmm...probably coulda used those trash cans with the amount of overflowing trash accumulated on July 4th - especially in the inlet...but I digress since spending $$$$$$$$$$$$$$$ to paint "TRASH CANS" makes people feel good.

Lemme clue you in Geriatric City FAIL - people DON"T care about pretty trash cans. Only YOU do. People DON"T care about water towers with pretty colors on it. Only YOU do. People care about SAFETY on the boardwalk - AFTER 10pm. ??Whats that FAIL - can't quite hear you??? Oh, you're asleep after 10pm. Well that's nice, how about LAW ENFORCEMENT????? Drunk people will climb over medians in the future and why? Because the will be drunk.

Bottom line City FAIL - spend my money wisely. That's ALL I and others ask. We look foolish so pie in the sky ideas need to stay pie in the sky!!

time to let it go. Its time to let the sink hole go. No more money to plug a sinking ship!

After the border wall.

Share some of the millions they are spending on poplar island ...it can be saved as well as rebuilt...

if they want a seawall, let them pay for it

why should my tax money go for that?

Why can't the island be listed as a historical treasure, which it is. Dating back to 1600's, their culture is to be kept alive.

The irony of building a seawall for an event you don't believe in...

Was just there visiting family they do need assistance. The Army Corp of Engineers has been trying to help over the years but it is not enough. I hope it gets all the attention it needs. If you have never visited do so it is quiet and peaceful and the public transportation for the most part is bicycles and golf carts.

Don't spend another dime of my money on this lost cause. Sea level rise, land subsidence, and erosion have all spelled the end for these spits of land. It's not worth pouring all those millions into saving.

Something tells me if you have never visited, do so AND QUICK LIKE!!

At least PBS has good half hour shows on the islands, once the do go away!

Build the seawall and add to it every year as necessary.

We all live on a big sandbar which flowed here from the Appalachian glaciers.

Preserving who we are since the Ice Age seems normal to me.

Sandbars move and sink, if you need any testimony to that, take a coastal airplane ride over Cedar Island of Virginia and north from there. What you will see is a thin sandbar a little offshore of a larger sandbar and a thousand plus miles of ocean that it is at its mercy, and you will understand a sandbar's chance in heck against tropical storms and nor'easter. Properties there are bought there regularly to move homes built on once dry lots to now dry lots, DUH.

To ignore reality is ignorant, hence the title of the word "ignorance".

Preserving all the islands we treasure and the people who reside there is preserving the history of our State and celebrates the wonderful people we value most in the State of Maryland.

Love it to leave it, but we'll still be here!

If any naysayers were from there they'd have a different outlook. The Chesapeake Bay islands are treasures of MD and VA. Some are under water now, lost before there were groups supporting their preservation. If buildings and cemeteries elsewhere can be saved by grants, why not Tangier and Smith Islands? Visit them and you'll take a step back in time when things were calmer and simpler. Priceless!