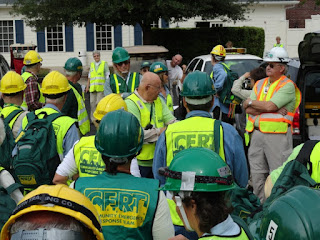 Thirty local and state agencies answered the distress call for Queen Anne’s County when a tornado touched down early Monday night, and Ocean City was one of them.

Emergency Services Management Coordinator Bob Rhode was deployed to Stevensville around 6 a.m., hours after an F2 tornado touched down on Kent Island. The twister traveled on the ground roughly two miles near Stevensville around 1:30 a.m., bringing 125 mph winds and torrential rain.

One person was injured by flying debris during the storm. Several wood-framed townhomes had the upper floors entirely lifted off along with the roof and several other homes had either roofs lifted off and tossed or received other damage, according to the National Weather Service.

“The damage was substantial, comparable to other situations I’ve seen,” said Rhode, who has worked with Ocean City emergency services for roughly 30 years. “Thankfully, there were only two businesses damaged, and one had insurance. The other was a fruit stand, and they’re out for the summer. It’s mainly the houses that were damaged from trees falling on them and the winds. We’re trying to get a grasp of how many.”

Boots on the ground...
That's how Bob Rhodes rolls!

Bob Rhodes is hated, and not one employee in OC respects him. He brags about counting the days until he retires.

Anonymous said...
Bob Rhodes is hated, and not one employee in OC respects him. He brags about counting the days until he retires.

You know Bob Rhode, not Rhodes, almost as much as I do. Yes Bob RHODE is hated by people in Ocean City and MFRI. He is a public works employee because he could never get a job for Ocean City EMS. Nor could he get a job volunteering for the fire department.

What is funny about Bob Rhode is that that he volunteer in one fire company in Worcester County and his wife had to volunteer at another volunteer fire company because one department would take one of them but not the other.

Another interesting side note is that Bob's son was involved in the officer involved shooting in Ocean View Delaware in March after he chased the guy from Worcester County to Ocean View, De.

The Worcester County Sheriff's Office additionally identified the deputy involved in the shooting as Deputy Anthony Rhode, a nine-year veteran with the department. He was uninjured in the incident, officials said.

Originally, a Worcester County Sheriff’s Office Deputy observed a vehicle driving in an erratic manner in Ocean City around 8th street. The Deputy attempted to stop the vehicle. The driver, a 31-year-old male from Hurlock, then fled from the Deputy.

AMEM! I worked with Bob before he was transferred to emergency management, and he was both incompetent and dispised then. Dennis gave him the option of a transfer, or be fired. Thats government, just move the trash around.