MD Rep. John Delaney is running for president in 2020 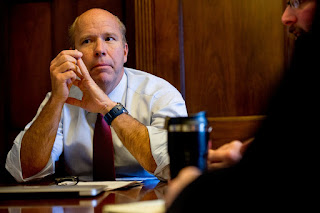 Rep. John Delaney (D-Md.), a moderate who has represented Western Maryland for three terms on Capitol Hill, on Friday became the first Democrat to formally enter the 2020 presidential race — just six months after the election of President Trump.

“Obviously, I believe he is a terrible president and taking the country backwards and really undermining some of our most important values,” Delaney said a phone interview Friday afternoon, shortly after he announced his candidacy in an op-ed published by The Washington Post.

“I think Trump, to some extent, is a punctuation of everything that has broken down with our politics,” he said.

Typical dumbocrat - running against Trump instead of for the people!

When your enemy is blundering - don't stop him!

We haven't had a seriously bald guy in the White House since Eisenhower, and he was anything but a Democrat. This guy says he recognizes that U.S. politics has gone fershizzle, but is he going to do anything about it, or is he another zoned out Liberal in some other clothing.
At this point, I don't trust any Democrat leaning toward running the Country, not when the leadership of the party is in the Twilight Zone and has proven to be a big d'bag of cheating career liars.
Show us the goods and we'll have a look, just to be fair, but don't expect miracles.

Haha, another democrat from the peoples republic of marylandistan with even less name recognition than martin o'who had. He wont even make it to the primaries...

He will lose bigly

This guy as well as most MD politicians dont give a crap about citizens. They push illegal agendas for votes. They have made us a sanctuary state while we go to poverty due to the area overrun with unlicenced illegals working under the table in all aspects of home improvement, commercial and residential. They dont get pd less either. They just arent on the books so companies dont have to pay tax, health,etc or workers comp and liabilty. Its illegal to use these people by state labor and lic laws but democrat politicians get to break any laws they want. Sick of getting kicked in the stomach by these losers that wont abide by laws and yet make our children pay in higher taxes to cover for the cost of illegals. Sick of them pitting us against them instead of following the laws we all must follow. No more politicians that get to ignore fed laws, ignore their tax paying citizens, while destroying everything our country stands for..liberals destroy life, not presevere it. They have destroyed every country they dominate because an uncivilized, immoral, unethical,devalued society always leads to kaos.This guy needs to clear his dirty closet before he runs. We need to get our state back from the mindless....democrat politicians are now the extreme liberals and leaders of criminal behaviors.

Laugh of the day!

By 2020 these idiots will be afraid to throw their hat in the ring. The Donald will have democrats voting for him and he will win YUGE. By then they will want to change the books and have the Trump/Pence ticket do a third term, even at his age. The man has more stamina than any we have see in the office.