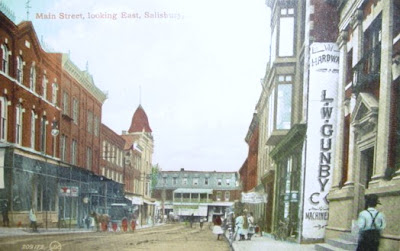 (All the street numbers were changed in Oct. 1952)

(Before the dam broke in 1909 and formed East Main St., every address was Main St.

There were no street numbers.)

On the South side only, starting at the corner of Dock St. (now Market St.) – heading east

Vacant lot ( later to be the Farmer’s & Merchants Bank)

On the North side only, starting at Division St.

Bergen notion store (on corner)( later to be White & Leonard)

Store of Birckhead and Carey

Store of Fowler and Timmons

What you do is amazing about the history of our city and residents of long ago, names that and faces thanks to you we can see again. Thank you.

Thank you, George. I love your articles and look forward to them every week.