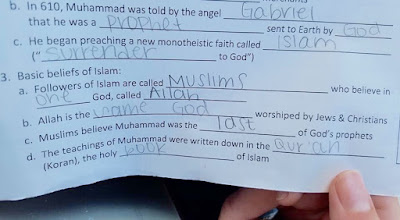 Two Tennessee lawmakers are wading into the controversy surrounding lessons on Islam in public schools by reminding school officials of their obligation to share classroom materials with parents.

“We have received reports that parents are being refused access to material used in 7th grade social studies regarding the teaching of Islam,” Sens. Mae Beavers and Kerry Roberts said in a joint press release cited by The Tennessean Thursday.

“We want to remind all Tennessee school districts that the law is very clear and that any teaching materials of any grade level shall be made readily available to parents or legal guardians at their request.”

An attorney representing the majority of Tennessee school districts denied that request because the ACLJ is not a state resident, a technical requirement for disclosure, despite the fact that a local attorney signed the requests.

Parents across Tennessee and other states have objected to lessons on Islam taught in public schools that require students to write or recite the Islamic call to prayer: “Allah is the only God, Mohammad is his prophet.”

And so.. where is the Freedom From Religion Foundation on this one?
Surely the atheists will be in a tizzy over such religious indoctrination.
Oh, wait.. this was about Islam, not Christianity.
Never mind.

I bet the parents wouldn't object if the kids have to learn to recite the Lord's Prayer though.

The same parents who holler that "prayer is needed in schools" forget that the Islamists are all in favor of it, as well. And it's going to be the Islamic prayers, in areas with a substantial Muslim population.

They don't seem to understand, that "separation of church and state" is our only Constitutional defense against an Islamic takeover. Look at how Onama has scoffed at our Constitution, and he's just a Muslim sympathizer.

No prayers in schools means less chance for the Islamic infiltration into our way of life. If your kids want to pray, let them do it silently and to themselves, until they get home. Same with the Muslim kids.

Islam is a far greater threat to Christians, Jews, Catholics, Mormons and atheists, than we are to Islam. They know it, and will keep exploiting every opportunity to subvert our country, until they can outright take over.

There are already public schools here in Maryland, that allow Muslim kids to duck out of class for prayers five times a day...some with their own special "prayer room", a "Christian-free zone". Don't let them get a toehold. Any Islamic influence on school policy is a dangerous thing.

Better to have no religious expression whatsoever practiced in public schools, than risk Islam's strangling tentacles encroaching into the classroom.

So separation of church and state is out the window only when it pertains to a very limited (minority) population of radical (jihadist) so the state can BRAINWASH children into doing the same here? I think I need to buy another gun. But with it I will surely teach my child how to wield it with utmost respect and discretion. Then let them make up their own mind of what religion if any they would like to peruse. Because realistically is a battle over who has the best imaginary friend and who is the state to decide one imaginary friend is better than another...Maybe those who are pushing for restriction of rights (liberals), by removing or severely limiting access to guns, ammo etc. to promote a religion based on fear mongering and death of all non believers should be required a physiological evaluation. Because the days of do unto others as you would have others do unto you have long since gone and honor, virtue and dignity have all been forgotten by the state. Now the terrorist's imaginary friend, reliance on others to provide for you, and a severe lack of educational standards prevail to what end? Only time will tell but I can only take solace that I will hopefully not see it nor my children have to live with the mistakes taken by the ignorant and lazy.

What a great place to try this curriculum out - right smack in the middle of the Bible Belt.

FUNNY how muslims claim discrimination by christians in school but expect everyone else to ok Islam in school ? Screw them.

No prayers in school but muslima can pray and have foot washing basins ????? Total BS