21 most consequential Clinton scandals, ranked from most important 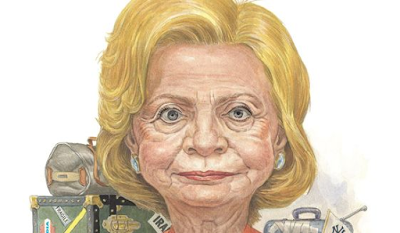 1. Monica Lewinsky: Led to only the second president in American history to be impeached.
2. Benghazi: Four Americans killed, an entire system of weak diplomatic security uncloaked, and the credibility of a president and his secretary of state damaged.
3. Asia fundraising scandal: More than four dozen convicted in a scandal that made the Lincoln bedroom, White House donor coffees and Buddhist monks infamous.
More
at 10/14/2015 12:45:00 PM

What's with that pinpoint pupil? Is this meant to say that she has residual brain damage from her "bump on the head" that caused her not to remember details of Benghazi?

Makes no difference to the ignorant liberals. Just the fact that she is even a contender to be their nominee with an indictment looming (not that it will ever happen-she knows too much), is evidence enough that they are mentally defective. What a sad condition this once great country is in.

How could they have this list without even mentioning VINCE FOSTER ?