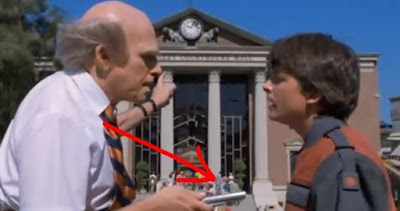 Dr. Emmett Brown (Christopher Lloyd) from the classic Back to the Future movies traveled through time itself in a time machine that he invented from a DeLorean. The movies gripped our imaginations and took us on an incredible journey through time.

In the second movie, Dr. Emmett Brown returns from the future to warn Marty McFly (Michael J. Fox) that his life is about to spiral out of control. This occurs because his future son participates in a bank heist. This creates a trickling effect through future history to demolish the whole family and Marty's life as a result. Dr. Emmett Brown's plan is to travel to the point in history where this situation began to stop it from ever occurring.

The point that they travel to is October 21st, 2015. This movie first came out it was 1989, so 2015 seemed like such a far-off date. What the movie did as a result for us was create a painting of what the future would look like. It was pretty inventive to anyone growing up in the '90s.

Even though the movie was making a glorified picture of what the future looks like, you will actually be quite surprised just how many of those predictions about the future actually came true.

They forgot to mention hyper inflation as well!