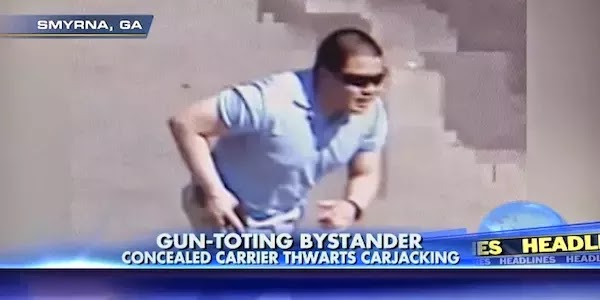 According to Fox News, a concealed carry holder in Georgia stopped a juvenile carjacking suspect, which possibly saved a woman’s life.
On Friday, a teenager in Smyrna, Georgia tried to steal a woman’s car. The surveillance tape shows the woman jumping on the hood of the vehicle (can you say DAY-UM) to prevent the teenager from driving away. Witnesses say that only caused the thief to speed up.
One of the bystanders drew his weapon and shot the suspect in the shoulder.

"The guy that got shot, he was falling out of the car and he was holding his chest. And he started shivering and shaking, and then he kind of flopped on the ground," witness Chris Roberts said.

The bystander held the suspect at gunpoint until authorities arrived. And that, my friends, is what concealed carry is all about.

The suspect was transported to the hospital. He will be charged with felony aggravated assault and misdemeanor theft by taking of a motor vehicle.

If that happened in maryland that guy would be arrested and sent to prison for shooting that poor innocent car jacker. Well maybe not now that we have a new govenor.

Shazzam!
THATS what I'm talking 'bout!
Too bad the cops in Maryland think "we, the people" just can't be trusted with guns.
They would prefer that people get robbed and beaten in public and be at the total mercy of any thug we encounter.
They WILL take a report, however, detailing how John Q. Citizen resisited his attackers as valiantly as an 85 year old man with a cane could...until he was beaten to death. Which will create more statistics. which will be used to justify MORE police. To write reports.
I'll bet "your guy" is hip deep in trying to change Maryland gun laws, reduce fees and fines, lower taxes and shrink the bloated, wasteful (a trip to Korea!?) Maryland government.
I'm sure of it.
Keep cheering.

Exactly! Good for the gun-toting citizen, he probably saved that lady a lot of headache and economic issues. Maryland needs to change its laws immediately.

Yes gov hogan what are you waiting for kansas just did it???

If you want to carry leave this state. Cause it wont be allowed here or do as i do and carry anyway

Add to that this 41 year old white male with no criminal convictions. Denied by MSP for a permit, but guess what?? Do as I say, not as I do?? Nice try.