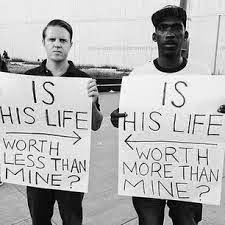 Yes, the silence on this is very odd. I understand respect for the family, but to say nothing at all is strange.

10:20, With all due respect, so what. The incident happened, period. This is what THEY would call developing news, if that were the case.

10:20 I agree with Joe. Investigation or not, Police Dept. should release the statement acknowledging the situation and ask for public help. Don't have to mention names, but should mention the gender. Now we have bunch of Keyboard Detectives coming up with words Racism, Foul Play, Murder and neither one of them have any facts to go by. My prayers go to family.

I think Al Sharpton will be here soon.

GOOG grief , Here we go " RACISM! Get over Yourselves,,Thats all You people know..I was in Walmart yesterday ...It was busy as heck..The poor white cashier who had been there 8 hours closed her lane..There were some black folks trying to get in line..Well the very first thing they did was start holloring if we was white she would stay open...COME ON IDIOTS you just heard the supervisor say she has worked 8 hours with no break..yOU PEOPLE GOTTA MAKE A RACISM ISSUE OUT OF EVERYTHING..iTS ALL ABOUT THAT black!This is not a black and white issue ...Some poor soul took his life let it be.You will hear in due time.SO UNTIL THEN SHUT UP!

Daily Times sued OC to obtain name of young drowning victim. (D/T lost the lawsuit) And now a person is reportedly found hanging by a rope in Salisbury...and no mention of it yet by the D/T or by local TV?

This is what it is and a very valid point, but its just like the unsolved murders in Salisbury not enough people care to make a difference and the families have to live with the pain.

Great point 11:05, if this story would have happened anywhere else but salisbury , it would have been a major headline. Its all about protecting the " image" of da bury .

You ridiculed "Black Lives Matter" for 6 months, and now, when it suits you, you stand behind it. Shameful hipocrisy.

Joe why can't you obtain details and report it first?. Who cares about local MSM and their new rules. First Alert also decided to not publish any info. The police have not released anything, so I's say its up to you, buddy, to feed the pubic the details we are looking for. .Thank you.

5-10 years ago there was a body found planted head first in the ground with only the air jordans sticking out of the ground on state games lands west of SBY. Never made the news or papers either.

I know it is news , but give me a break , who the hell wants to keep hearing about a hanging ?
However , I do question the fact , if it is a fact , why the media didn't cover this more.(if they did at all).

We are stuck with this liberal type media , like it or not.

Tony (the owner of rt12 pizza)was one of my best friends in the 20 years I knew him. He was a great employer and friend to many. All though tony had his own demands he dealt with he was a great guy. To this day I don't understand why his death was made so public. Tony did what he did in privacy behind locked doors. Yes the location was a business. On that day he never opened the doors for the public. Yet local media thought it was prudent the public be aware of something so private. I'm sure tony didn't want it this way. If he did he would have done it publicly. He didn't he simply wanted to leave this world in private.

Now the very public hanging the other day is very much news worthy. The public needs to know and has a right to know if this was murder or suicide. Look I can understand someone committing suicide behind closed doors that's a private thing and should be treated as so unless your a public figure. This person if they did in fact commit suicide did so in a very public way. Hence the public has a right to know what's going on. Was this person murdered or was it suicide? If it was suicide just let us know.we don't need to know the reasoning for it by any means. we as the public should be informed as this was a public hanging if it was murder or not plain and simple.


Tony you missed love ya man!

Report it as with any other story. If it was not a suicide, then state that the investigation is ongoing. Black on black crime is far, far more common that white on black crime so the suspects may not be Caucasian. It is the not reporting that looks racist.

11:55 is right about the person buried in the ground with his Nike shoes.this did happen on the west side. I'm guessing since the person was black this has never made its way to the public. One would be surprised how many murders have gone on to be unreported by the msn in this area.

I'm hearing the person who hung themselves is a 911 female dispatcher. Hence the hush hush about it all. Covering for one of there own is why the public isn't being informed. This coming from a coworker of hers is second hand info.

Why do we need to know?

By not acknowledging this occurrence to the Community, and withholding all information, even saying that there's an investigation underway, Barbara Duncan has become our enemy.

Please someone put an end to the speculation so that people don't get their tales in a knot and do something stupid. It is sad that the one person wants to make this something it is apparently not. Just put an end to the conflict as soon as possible please.

More often than not today suicide is not reported in the news. This is one reason it is difficult to get accurate statistics on how many people commit suicide with firearms.I don't know who, if anybody reported the Route 12 pizza hanging besides right here. The only other suicide I can remember being reported in the Daily Times and in detail was local businessman Donnie Williams (there might be others) and I never understood why unless he was considered to be a public figure and as I remember it was one story and done. We consider suicide of a private individual to be a private matter today whether the person hangs themselves outside in a tree or or shoots their head off in their house. I have been aware of suicides as an adult and unless that person was a public figure the only reason I knew was because I had a close connection to the family. Unless this was a murder it is unlikely we will know any more about it.

Agreed and this is coming a black man. People grow up because someone is dead and a family is mourning.

This saddens me to see all the black and white comments. Someone's child, brother or father has died and body was put on public display by some idiot who wanted to post it on Facebook. Take a minute to think about how his family is feeling and get over the racism...there will be no racist people in heaven so chill and fix it now.

I think that it's sad that it was made public at all. Whoever took the photo of him actually hanging from a tree, shame on you. It isn't about being black or white. It's about the fact that suicides should remain private. It isn't something that should be in the news for days, I'm sure the family is having a hard enough time as it is. Black, white, red, yellow, purple. IT DOESN'T MATTER. Someone took their life. We don't need it in the public eye, maybe giving someone the idea to do it themselves. As for some becoming public, and others not, maybe because he was a figure in the community it had press. But this kind of press, black vs white, isn't a promotion against suicide (or a promotion of anything that's positive). It's creating even more of a gap in our already failing society. Maybe instead of black vs white, we should promote ways for people to seek treatment who feel they have to turn to suicide as a last resort. Get your priorities straight people. Instead of creating more of a gap, why don't you use your desire to spread awareness for more of a positive impact on our community.

I think with the Rt. 12 pizza owner, he was well known and it happened at his business. With Donnie,he was also well know in the community. That's probably why they were reported.