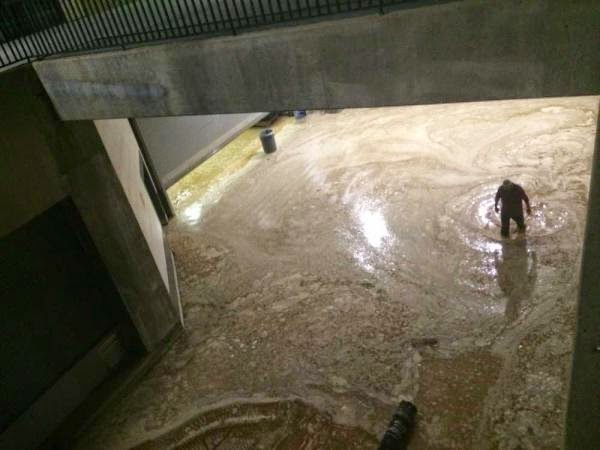 While the Civic Center was supposed to be an emergency shelter in Wicomico County, a 1 1/2 inch pipe burst late last night leaving six inches of water on the main floor.

We're told the water is even in the escalators, the Midway Room and other large areas of the Civic Center.

On another note, Salisbury roads are in HORRIBLE condition. The Mayor boasted about how they are ready for the storm and even though it was much less than expected, we just got an official report it is really bad in Salisbury. In fact they said, "City of Salisbury roads are in horrible shape". Long Ave. hasn't even been plowed yet.

The street by Dunkin Donuts is horrible!

12:17
Did you notice the text that says "Image not Wicomico Civic Center" ?

I talked to a Postman working at the Counter at the Rt. 50 Post office just moments ago. I noticed that RT 50 was cleared - but when I turned onto the City street leading into the RT 50 Post Office - it had never been cleared. The postal worker said he could not understand it either - as he had heard countless complaints all day about both the ingress and egress from the Main Post Office.

WHAT IN THE HECK GIVES MAYOR???

Just another reason the city and county government should be combined.

1:08 The city did a horrible job. Even streets that are cleared, they did a bad job, ignoring safety features of the road. I complain about the county at times... but the city residents are getting bent over dry.

Come on City, are you going to do anything about the streets at all? Geez, why can't you get the job done?

Wicomico County has done a nice job making roads passable especially on the eastside. I live near Powellville and we are appreciative. The first plow went by at 8:00 this morning. Kudos to our new leadership for making this a priority. Haven't seen this in years. Thank a county snowplow driver if you see them!

Yes, but mayor was at least nice enough to give us the day off at tax payers expense.

The County has done an outstanding job of getting the side roads cleared. First time for my side road in many years. Thank you to the drivers and thank you to Mr. Culver for your prompt attention to detail. And guess what? I'm a no body!

As far as the City is concerned. The mayor is the town joke.

That picture is not the civic center.

I thought all the emergency snow roads in Salisbury were supposed to be plowed first? Maybe I'm wrong but isn't one of the streets beside the main Post Office building a emergency snow route?

1:13 - Hey Mackes, you must really be bored in "retirement" if you are reading the blogs, since you said you never read them. As much as you claimed to love this county and the Civic Center, you should be devastated that they've had frozen pipes. True colors always come out. BTW, I think the real karma happened to you. ROFL

The City of Salisbury maintains that you must clear your walk within 6 hours of the snow stopping. But they take much longer than that to plow my street! And some people are essential employees who have to go to work!

As an employee who worked under Mackes, don't believe for one minute that he wasn't watching this blog. He just always wanted to act superior and that he cared so much about the county. Most employees would tell you it was h#ll to work for him. Had a really mean side that came out in temper tantrums. Bet his personnel file is a thick one with complaints that were covered up. His "retirement" was a win for all of us who had to deal with him on a daily basis. I agree with poster 5:47. Karma got you Gary baby!

When i came in to work i met mr culver already out seeing what the roads were like, this was 6.15 am! I also throw my hand up and wave everytime i see him good to have a hands on kinda leader who gives a crap about the county working man. He also personally thanks people for coming in on there holidays to get ready for the snowstorm.

Sha and the county roads did a great job .And they have a thankless job no matter how good they do someone wants to complain about it.i live on the east side and the street was nice plowed even and no mailbox damage even small cut in swails for the mailman.Great job to all.

I knew one day months ago when mackes was stomping the floor and cussing marvin ames upstairs something down the road of bigger magnitude would happen. He just needed to smoke and chill like we did for years right overtop of him. As for the water burst we hear some main turds from upstairs will soon be floating down thru the lobby and into the parking lot.