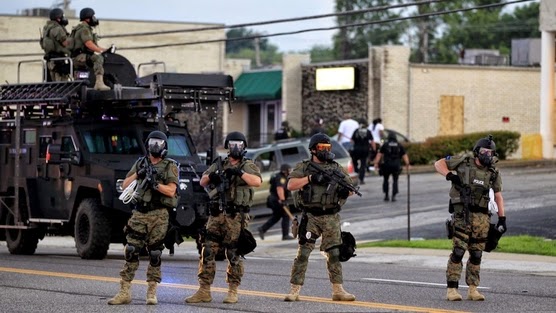 Our police officers are not our military. Yet military weapons meant for battlefields like the ones I served on as an Army Officer in the Gulf War are being transferred to local police departments around the country. Put simply, these weapons are not intended for local policing and often result in escalating - not solving - situations.


Thankfully, the Senate Armed Services Committee is reviewing the Weapons Transfer Program to evaluate how these weapons are being used. However, there’s no reason to continue sending weapons through the program while it's under review. So I’m calling on Defense Secretary Chuck Hagel to temporarily suspend the 1033 Weapons Transfer Program - something he has the power to do.

When local police departments have access to armored personnel carriers, mine-resistant ambush protected vehicles, M-4 rifles, assault rifles, rubber bullets and pepper spray rounds - we’re clearly seeing the militarization of local law enforcement. But police officers are not at war with American citizens - they are here to serve and protect us. But it only makes sense that if we arm them like soldiers going into battle, they will act like soldiers.

As a veteran and executive director of Veterans For Peace, I don't want to see our police militarized here at home. And I know many other troops and veterans agree.

The program has been suspended before in 2012, when some states actually lost track of military equipment. You read that correctly, these battlefield weapons have actually gone missing before. Yet the program was quietly restarted in 2013. It’s clearly time for a moratorium on the 1033 program while it is under review.

If all people acted like respectable citizens when they protest, and not animals, the idea to donate extra military equipment to police forces would have never been a thought. There is a purpose for it and it was brought on by the actions of some. Own it.

Hey mary this is going to hurt but those vehicles are for when certain people cant control themselves?

The wcso just got a mrap vehicle. Can we get this removed from them?? It looks like a monster. Mike lewis even compared his department with the military and they seek prior military personnel and they are paramilitary. I don't like the sound of this.

If youre not breaking the law you have nothing to worry about.

Then, you best duck and cover.

Certain areas are war zones, like Baltimore City for instance.
When a little girl playing on her front porch gets killed by a stray bullet from a gun fight in the street of Baltimore City a few weeks ago, it's a war zone.
When you have terrorists like that running around our city streets you have to use extreme measures. 12 kids teens and under have been killed in that city alone this year. It's an absolute disgrace what the blacks have done to that city. They are terrorists and need to be treated as such.

Oh give me a break. PD's carry the same AR-15/M-4 that any citizen can buy in any gun store.

How can the police enforce the laws if the law violators out power the police?

When ISIS hits here (could be this 11th of Sept) you will be glad the police are prepared.

But then they may be used to surround some golf courses so Barry can play uninterrupted.

Years ago the local law enforcement realized that they were out gunned when it comes to the war on drugs. I have a nephew in uniform and I was very pleased to see the extra support for the local PD when it was extended. I see nothing wrong with equalization of force between police and the hoods in the streets.

Anonymous Anonymous said...
If all people acted like respectable citizens when they protest, and not animals, the idea to donate extra military equipment to police forces would have never been a thought. There is a purpose for it and it was brought on by the actions of some. Own it.

Anonymous Anonymous said...
Oh give me a break. PD's carry the same AR-15/M-4 that any citizen can buy in any gun store.

That's BS and you know it.

ISIS is coming like the Taliban is coming.
A Country of Chicken Littles!

It's all smoke and mirrors. NAACP is racist, so it's not about the equipment the police buy, but rather the blacks wanting to divert the problem, the crime they are committing.

Nothing BS about it 4:52. They are just semi-auto .223 rifles anyone can buy. The local PD have had them for decades. Not sure what the big stink all of a sudden is about them.

Did I miss something? It's not like the police used a tank to blow up the looters! But that is what was needed...

Agree with 5:41 NAACP was initially to see that all people had equal rights, but the table is at a full tilt against all whites before trials, and facts. Everyone should have a fair trial not trials by street thugs and protestors you have brought back the 1960's you should be ashamed.

Hopefully the police will use the equipment to protect us from the black mobs of thugs roaming neighborhoods, looting and killing innocent Americans.

All these years and the NAACP has nothing to show. African Americans have the highest unemployment rate, the highest school drop out rate, the highest poverty rate, the highest crime rates.......the list is endless.
They have excelled in nothing.
Their enemy is the NAACP.
The best that can be said about the organization is that it creates jobs for them-prerequisite being you must be proficient at lying, blaming others and making up excuses.
They will rot-in hell. The record heat in Ferguson yesterday for the funeral was a sign from God. Unfortunately most are too stupid to heed the warning and will continue doing the devils work.

There is alot more former or para military who arent cops. Lewis's mob squad is a joke. Either fat and unfit or so skinny the wind blows them over. Hell they cant even keep our cars clean. Elite my ass. Slouches. All of them.

Bottom line, Since 911 Police Agencies have been tasked with protecting the homefront from terrorists.

Why as tax payers would you want your police to spend their own budgets buying AR15 rifles when your tax dollars have already paid for the same rifles from the government.

The money saved in this program is used to pay for extra officers on the street.

Why does a department need an armored vehicle? Remember the North Hollywood shootout when two men armed with AK47's and body armor kept 200 officers pinned down. LAPD had to go "borrow" AR15 rifles from a gun store and used an Armored car company to help pick up downed officers and citizens.

None of these agencies use these vehicles until they need them, if you don't have it and need it someday, people die, bottom line.

Appears allot of cops or Nazis commenting on hear?? this is about tryannical power...people??...when our local government decides we all better off under machine guns turets...armored tanks ...jackbooted thug armies and battlefield equipment..WE HAVE an big PROBLEM..were do i sign....

I would have agreed with you 7:32 until the Bundy Ranch incident in NV happened. To me that proves LE whether it be local or federal isn't going to shoot on innocent Americans. They sent the message by refusing to harm the PEACEFUL protesters (unlike the abominations in Ferguson that showed their ignorant true colors) that convened on that area.
But let's be truthful here. Some areas are war zones. And if truth continue to be told those areas are predominately black areas. If we didn't know the location on some nights Ferguson could have been mistaken for the compound in Benghazi. We are dealing with home grown terrorists and they need to be treated as such otherwise the problem will proliferate. It's already out of control with them. They contribute nothing and cost good Americans untold amounts of money within the justice system and the welfare system. In order to preserve what's left of a civilized society they need to be put in their places once and for all.

She's a waste of good air. A mouthpiece for the democrats.
If the woman had any sense she would be screaming about the influx of illegals and how her controller the democrat party wants amnesty.
It's her people who are working the low paying jobs in places like the chicken companies. This constant flow of immigrants willing to work these low paying jobs means her people will never get raises.
No sense in going on though. You can't fix stupid.

Anonymous Anonymous said...
How can the police enforce the laws if the law violators out power the police?

why would anyone need grenade launchers, armored vehicles, machine guns, silencers, etc., to enforce a law?

It is not that the police have these things. They are objects such as guns. Guns don't kill people, people kill people. Take the same logic and apply it to this situation. You have a bunch of heavily armed police officers many with combat experience. THIS IS NOT A WAR ZONE!!!! We do not need ex military to be police. They have been put through the paces and are hardened in the way they deal with things. Everything is a threat to be dealt with. We need competent men and women trained in how to deal with humans on a human level. Not combat trained men and women who view you as nothing more than a target.

So no them having the equipment is not the problem. The problem is the men behind the weapons. Train them to understand the situation first, which many don't. They are acting out of instinct. And if you as a police officer who is ex military can not overcome your trained instinct to do harm then you should not be a cop.

You know who does make a good cop? People taken from the community, because they have a vested interest in keeping the peace. And as we have been shown time and time again the police are not here to protect and to serve which leads me to say I just don't see the point of having a police force.

3:57 store bought AR's are junk. Build your own to be above PD tier. AK is master race.

So now blacks want to limit police so they can outgun them on the streets! This amounts to the NAACP taking the side of the thugs and criminals in society. Nothing more.
The NAACP is becoming a terror organization!

Do you know the defenition of equal? Its the root word of your flipping crazy!

Mike Lewis thinks he is Napoleon with that MRAP vehicle. I wish somebody would run against him.

Anonymous Anonymous said...
Mike Lewis thinks he is Napoleon with that MRAP vehicle. I wish somebody would run against him.

He thinks he is Napoleon WITHOUT that unneeded surplus war machine.