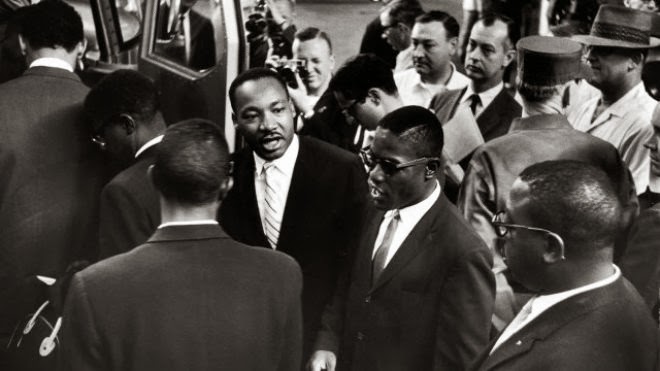 Fifty years is a long time -- just ask Dr. Martin Luther King Jr. Fifty years ago he had only just delivered, in August 1963, his historic "I have a dream" speech. He didn't know it but he was about to win the Nobel Peace Prize and see the United States Congress pass the historic 1964 Civil Rights Act.

It also marks 50 years since I was a little boy with a dad.

Fifty years ago my dad, with his brown skin, could not have been a political analyst for a major network.

He could not have been an editorial writer and White House correspondent for a major paper. I did those jobs for The Washington Post. And 50 years ago he could not have lived in an integrated neighborhood in most of America. I do.

MLK would hate how his message has been distorted by womanizer fools like. Sharpton and Jackson.

It is actually worse in the last five years....

5:50
I guess you didn't know the good Dr. had extramarital affairs also?
The problem with Democrats is them uplifting those that do not deserve it.
(to satisfy a quota based on race)
Dr. King however noble you think he was did not live what he preached. He tried, more than some but failed. He was a racist like many blacks that think they are deserving, when they don't do what it takes to deserve.
When they as a culture learn that and live it is when they will find true freedom.

Yes 11:43 you are correct Dr. King did want what many like you believed he did not deserve. Freedom and equality.

Was'nt Juan fired from some news agency a few years back?

8:51 Dr King had the freedom and equality to be a hypocrite womanizer like many Democrats of our time. He had the freedom and equality to chose to live what he preached, but he did not.
Fact.
Everyone deserves freedom and equality.
Some of us, black and white, chose to use it wisely, some of us do not.
Statistics prove the majority of the black culture are painfully deficient in all aspects of life even now, after decades of affirmative action that was intended to circumvent the low standards of black society.
Blacks have squandered the opportunity that was unfair to start with.
Everyone, black, white, red and yellow should have EQUAL opportunity in education, employment and life in general. That is not possible if affirmative action stands in the way and unfairly promotes one group above another to affect outcome. No one is served by this erroneous policy, especially those it is intended to help.
Allow the playing field to be level so as to lift the standards of all, not lower standards for some to be elevated just to meet inefficient quota systems.
Repeal affirmative action like Dr. King would have wanted. Fairness for all.