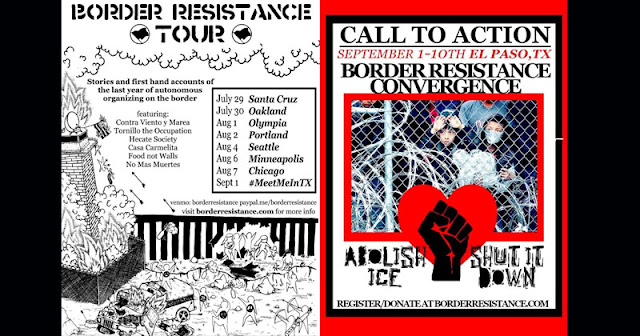 Antifa is preparing for a violent 10-day siege on the southern border in El Paso, Texas, in an effort to “shut down” Immigration and Customs Enforcement and open the border to illegals.

Journalist Andy Ngo, who was brutally attacked by Antifa in Portland, Oregon, last month, showed flyers Antifa is using to promote their effort for September, featuring images of ICE agents being murdered with bow and arrows and firebombs while anarchists bomb an ICE facility and southern border wall to let illegals flow into the U.S.

“Antifa is leading a ‘Border Resistance‘ militancy training tour that will converge on a 10-day siege in El Paso, TX,” Ngo tweeted Monday.

Obama. We knew, yes, yes. For an eternity, "they" (you know who)! Pacified the ''populace"" with gladiators, games, (NFL?) And the opiates of the masses. Distracted we were. Our Greatest Leader, yes, Mr President Donald ""J"" Trump, showed them (Swamp( )NWO globalist demons) to the World! We said NO! The United Kingdom said NO! The Hunagary people and Pollish said NO! The hallway must be dusted, yes! Time for the globulists to be outed (Merkle, Pelosi- malfunctioning again?, Clinton- Uranium One?) They are the evil empire (Reagan, yes ! He saw the truth!) We must say no !!!

Send in the fully armed Nation Guard and shoot every damn one of them!

At what point is this considered a terrorist organization???!

This is terrorism. I am prayerful that our border patrol officers will be safe as they protect our country and her people. What other country in the world would tolerate this?

Only after they kill a certain number of people. That number will be determined by the MSM and not the government because the deep state refuses to be proactive against these as well as the likes of BLM and BP.

Oh this is going to be fun to watch. Antifa bring bows and arrows against trained border patrol and U.S. military personnel with automatic weapons. Nothing can go wrong with that plan.....LMAO. They want to start a war, when they can't even start a lawnmower!!

The American flag is on fire in the "flyer" that looks like something a 12 yr old produced at school.

That arrow can fly as fast as a bullet. These people are certifiably nut case terorist. God protect our border control.