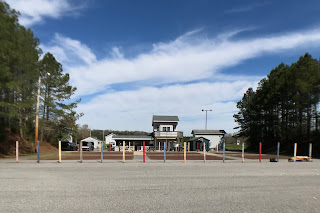 The use of the Worcester County Firing Range is open to the public every Saturday, with the exception of certain holiday weekends and weather related closures. The public hours are from 8am-12pm. The cost is $5.00 per person. Targets are provided and we ask that you bring ear and eye protection with you. We offer both pistol and rifle lanes.

I’m excellent I need no practice.

I have used the county range many times. It is a first class facility and run by the Sheriffs dept who are always willing to help new shooters with any need they may have.

Open only 4 hours per week dosent make it public, but it does allow them to claim "public range" so they can use all public funds to pay for it. Id wager they gov employees can use it nearly anytime.... bet the waiting line is huge most saturdays too. Sad sad times when our own local leo's are proficient at abusing the public and their funds.

If you believe that you're delusional. Like anything, marksmanship is a perishable skill. Use it or lose it.

I prefer that law enforcement can hit what they are aiming at when they pull a gun. Besides the police themselves are paid with public funds.

They got cameras out there running facial recognition routines.

Range isn’t long enough for my ability. Thank you.

What is funny to see here is all the misses that are off target, and knowing this is a law enforcement range!

Why is the Sheriff's Dept. there if it is a "public' range? Do people have to sign a form, or show id or anything like that? That to me would be them keeping records of people with firearms, type of firearm and how many. As one other comment said, photos of people are being taken without their permission with the cameras they have there.

What is the rifle range yardage? I need at least 500 yds.

Only four hours a week? It's a PUBLIC range. It should be open 7 days a week. It is not supposed to be for law enforcement use only. Tax money built it, tax money takes care of it. We should not even be charged to use it. Think I will just use the range in Vienna. There I have actual privacy.

Only open Saturdays and for only 4 hours? Are you kidding me? What right do they have to limit the public's use of this, if it is a PUBLIC firing range? They forget they work for us, not the other way around. This was built with OUR money and they are paid with OUR money. We need to demand they let us use it whenever WE want or shut it down. WE own it, not the Sheriffs Dept.

You will use it when we say you can use it.

Another way for them to get your grandfathered unregistered handguns registered. Don't do it!

Let's see; they'll get you to pay $5.00 to let them see if you have a registered handgun, or not. And if is isn't, they will unofficially register it for you when you check in to the range. You'll be asked to present ID and show them your weapon for "inspection." Of course they'll provide targets, and collect the bullets that came out of your gun. Remember Glendening's ballistic fingerprinting law that was eventually discontinued? Those bullets from your gun will go on record with the Sheriff's dept. and be tagged as coming from your weapon. I'll go to a private range, thank you, where they aren't against the citizen's right to carry and own firearms. That "open to the public" policy is just a data collection tool for the Sheriff's Department. Don't do it! Somehow I believe many a lawful gun owner are being duped into surrendering their rights by this offer. Remember, when they come for the guns in this country, all they need it to know is who has them, and where they live. Go to that range, and you make it easy for them, when our politicians make a law requiring them to.

Some of you are obviously mistaking a limited "open to the public" County Sherriff's Department firing range, with a privately owned open to the public firing range. There are basically four types of firing ranges. Privately owned and open to the public, guns clubs for members only, government owned and operated ranges like the one in Worcester County, and your own private property, if allowed by local zoning laws. The one in Newark is maintained for the Sherriff's department's use and paid for with taxpayer money, just like their vehicles, uniforms, and other equipment and buildings. That does not make any County sherriff's department's property "public" property, or the range a public range.

now he will steal

by not returning a tax paying citizens Firearms

Lewis already does this using Civil filings in court....you need not do anything...just be accused

Lewis takes your guns....supposing destroying them, and not returning them after you
needed to prove your innocent

from someone's say so...

"Lewis speaks with fork tounge" a Indian would say

I agree with above statements

If you just want to gripe, my advice is DON'T GO THERE! Get lives ppl

Lewis is not Worcester Co. Matt is our true leader we love him !!!!!

The article couldn't be more clear where the firing range is. Either some of the commenters have no reading skills, or they don't know what county their sheriff (M. Lewis) works in.