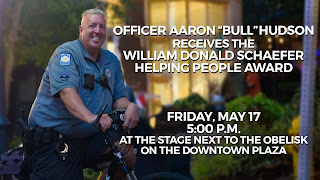 Join us on the Bullevard this Friday at 5:00 p.m. as Comptroller Peter Franchot presents our beloved Officer Aaron "Bull" Hudson with the William Donald Schaefer Helping People Award. We will gather in front of the performance stage next to the Obelisk on the Downtown Plaza. Ceremony will begin at 5 sharp. Let's celebrate our friend at his favorite place, as part of his favorite event. :)

Established in 2012, the Schaefer Award is presented to the individuals and organizations in each county and Baltimore City best exemplifying William Donald Schaefer’s lifelong commitment to helping people. Winners are selected based on their demonstration of: improving the community; swiftly solving a citizen problem hrough effective government intervention; directly aiding the most vulnerable in society; or creating a public/private partnership to improve the lives of Marylanders.

What an award.
Yeah Donald
Mikulski covered him for being GAY and he her a lesbian. There are people in jail for arson that were Willies hand picked boys from church choirs and the streets that went from treats to burning down the East harbor water fronts for development.They were both the most perverted and cruel persons in Maryland politics.

6:12 what are you talking about. You sound like the ravings of a madman.

Sorry but Y ????? He killed himself aka against God's will.

Why do we honor a person who killed himself?

Yeah, the Nobel Prizes are terrible too, because he invented dynamite.


Does the Comptroller know why the honoree won't be present? This strikes me as an inappropriate selection due to the circumstances, which is not to undercut any achievements made while alive.

This unfortunately reminds me of the situation where the local NAACP gave a posthumous Father of the Year award to the dad that had his electric cut off for non payment and ran a generator in his kitchen. He ended up killing his all his children and himself with carbon monoxide.
That’s not exactly award winning.

I have to agree, we shouldn’t honor a person that committed suicide. It’s a crime, because the survivors have to live with it.

Just another Jake Day social media ploy!! He gets to play compassionate mayor and show off his downtown vision

Welcome to the new progressive liberal mentality!! We didn't bother to help the poor guy while he was alive so we'll give him a posthumous award to ease our conscience

Peter Franchot coming down to do some more dirty deeds. Maryland and Salisbury is nothing but a bunch of low life wanna be-look at me I'm so important. Franchot is a snake and his name pops up on several less than honorable deals yet Salisbury rolls the red carpet out for this douchebag at leat once or twice a year. I wonder if Mike Dunn will be"entertaining" the after party?? Dunn sticks his head up Franchot's ass Everytime he comes down

Salisbury has become so fake and distasteful. Jake Day will stop at nothing to draw attention to himself. The man committed suicide one would think DAY would leave his family alone instead of dragging them through such a "political" fiasco. I pray people follow the students example from the Colorado shooting and get up and walk out on Day and Franchot trying to make it about them

It doesn't matter what year it was you dumb a$$. Putting a male reproductive organ in another males fecal filled excretory canal for sexual pleasure is sick and still constitutes a MENTAL ILLNESS!! You are one sick individual to condone something so perverted and immoral.

You know what is ironic? Peter Franchot screwed William Donald Schaefer over because he was working closely with Republican Governor Bob Ehrlich. The Dems backed Franchot into running against and beating Schaefer and then Francho creates an award in his honor. How two faced is that and how does it relate to a dead cop with a mental illness? It's just another Jake Day dog and pony show at the Libtard 3rd Friday event.

Anonymous said...
This unfortunately reminds me of the situation where the local NAACP gave a posthumous Father of the Year award to the dad that had his electric cut off for non payment and ran a generator in his kitchen. He ended up killing his all his children and himself with carbon monoxide.
That’s not exactly award winning.

I agree, that wasn't too bright.

The Comptroller(tax man) giving an award to a person who committed a sin. Doesn't make sense to me but then again neither do the rest of the Democrats.

Jake Day at it again!! This guy will go to any extreme to get attention. I doubt very seriously the Hudson family wants anymore attention drawn to themselves. Day has NO shame in trying to come up with ideas or agendas to parade himself on social media. Never did hear much about his ride my bike to work BS!!

The fact that he committed suicide is between him and God. It doesn't take away any good that he did, if he was Gay so what it doesn't mean their mass murderers, can you have a little tolerance for others. God says we are to forgive, your heart tells you to forgive if you don't then you have some rubbish in your closet.

@8:11 I feel bad for you!! This lifestyle is a circus atmosphere with drugs and alcohol prevalent. Why if it's "SO NATURAL" in 2019 do you need to be whacked out of your mind to partake in such behavior? I Know why because it's an unnatural act and your bodies chemistry is fighting the ungodly act. 2019 and it's still a sin

William Donald Schaefer will be rolling over in his grave if he knew the award named after him was going to someone from the "shithouse" of Maryland. His famous words describing the Eastern Shore, not mine.

Perhaps YOU have a fetish, or two, that you are ashamed to share with us. Being gay is no more than any other sexual preference. When you finally get mature enough, you will realize it. Some (most) people like some kinky things in their sex life. Gay sex is just another preference. Behind closed doors, it isn't anybody else's business. Was I always this enlightened? Hell no. But I've grown up. Now transgenderism, that's another story. The idea that a person can "identify" as a gender other than their biological gender, well that is just mental illness, pure and simple. Biological gender is a science based identity. Anything else is just fantasy, and the government and society have no business normalizing the idea of a pure mental illness.

Our local elected leaders have allowed the governor and Annapolis to turn it literally into a shithole!! Can you imagine the image Salisbury portrayed with Ireton then day as mayor?

3:09
It is a mental illness. I would bet you were hurt by someone of the opposite sex so now you are trying the other. We don't really care what you do in the bedroom. We are sick and tired of you trying to tell everyone that is is normal. It's not! If someone doesn't agree with your life choices so be it. Don't throw a hissy fit.

It was also done in a way to inflict maximum emotional damage on someone else on the way out. If he was such a wonderful guy he could have easily just left the bad situation.

If you like to play in poop, you definitely have a mental illness. I can't even stand the smell of it. It makes me GAG AND THROW UP. Can you imagine having it all over you in your bedroom. If your children (not babies, who don't know better) liked to play in their poop and have it all over them, wouldn't you take them to get mental help?

They are not leaders, they are representatives. If they lead and you follow then that makes you an idiot. We elect them to represent us. They do not lead us. Have a mind of your own. Never follow.

First reading your comment I was starting to go against you but now I agree with you 100% here it is plain and simple transgenderism and liberalism are mental disorders. Plain and simple