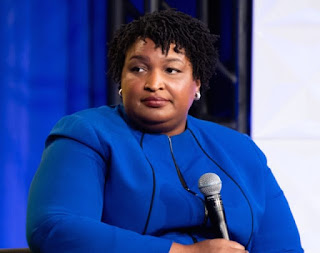 Failed Georgia gubernatorial candidate Stacey Abrams on Friday accused President Donald Trump and his administration of having an intentional “strategy to erase certain communities from the national narrative,” which she said is “most evident through the citizenship question” on the Census.

Speaking at a National Security Action event in Washington, DC, Abrams said the citizenship question has not been used “since the weaponization of immigration has been part of our body politic” after the country had more “robust international immigration” after the 1960s.

She said the citizenship question is designed to reduce the count of illegal immigrants and “mixed families” and added that it “targets black men” by propping up counts in states in which they are imprisoned instead of their home states. Abrams said poorer communities, as a result, never get the resources they need to respond to the “mass incarceration” crisis.

Abrams also said the Census ignores children in poor communities, leading to over-crowded schools that “never get the resources.”

Man is she pure.

Irrelevant POS!! Get your own house in order before you try to play politician

She's cherrypicking some aspects, generalizing others and flat out making up the rest.

I would like to erase fat ignorant slobs who suck off the tax payers. But not by killing them. Get them back to work. Make them productive. Not a bargaining chip for worthless dems because they see a captive voting group.

And since she is a complete outsider, she really does not know anything that is the intent of President Trump or his Administration. Just another one putting out fake news.

How about that monkey pretender say something about "mass criminal activity" in the black community?
Or is she of the mind that the white man didn't put Tyrone in jail for bank robbery and murder, they put him in jail because....wait for it......because he was black.
Black people, as a group, will NEVER be anything other than people waiting for someone else to give them things, to tell them how to run their lives, and pay them to be remain stupid and dependent, until they accept the responsibility for their condition as THEIR RESPONSIBILITY.
Quit waiting for (and believing!!) the next white politician that tells you everyone is racist EXCEPT HIM and he will be the man who can finally give you everything you need to finally be free and rich and happy and satisfied and complete and equal.
WORK and EFFORT are NEVER part of that equation with democrats and liberals.
She is just another echo chamber for idiocy and incompetence.

People actually VOTE for people as stupid as she is for LEADERSHIP positions!!
Keep buying guns.
Stupid leaders will need to feed the Tree of Liberty.

(Don't worry, these Bozo's don't know what the Tree of Liberty is....)

How can anyone believe this 15 sandwich eating bitch .

People keep hiring her (DNC supporters) because she never shuts up and never gives up. She's been assigned to the Gas Attack Section of the Smoke & MIrrors Brigade of the DNC Psyops Warfare Division, where her talents are used to screen and confuse.

P-U-R-E to the core!! Everything is "whitey's" fault

She's pulling this one out of the Globalist playbook. It's actually THEIR goal to eliminate certain communities from the World narrative.

Knowing who is in your country actually strengthens a nation, not weakens it. You can't take care of your own if you don't know who they are. You can't plan for guests unless you know how many are coming.

Stacey Who? Dear Democrats, is this Tax Cheating Welfare Slob one of your "leaders". Blaming Whitey for everything, including her Failed Candidacy. WOW! Just keep putting this Tele-Tubby into the spotlight, and every time she opens her mouth we all can see how racist, ignorant and brainwashed she is.
Keep America Great.
TRUMP 2020

Go home fat girl and finish your bon bons. It's past your feeding time. Go to your trough.

Let’s pass a law that any politician who speaks in public or tv must wear a lie detector!

Blame the press for even acknowledging her and that goes for AOC.

How much food must you eat to balloon that much - she looks like she's ready to burst.

What a big fat mess

How about we just erase her

She's got to be out of her "cotton picking" mind to go out in public in that blue outfit. She looks just like Violet Beauregarde, when she blew up, on Willie Wonka and the Chocolate Factory.

Northwest Woodsman: What is so difficult to understand that blacks commit more crime and therefore are the majority of felons incarcerated.? Seens pretty obvious to me. If you are interested in specifics of black and brown crime, check out “The Color of Crime” which is compiled by the FBI from crime reports submitted by police departments around the country. For those of you who don’t believe what you see and hear every day in your communities. You folks have become desensitized to the crimes that occur around you every day. I grew up in Snow Hill in the 50s and early 60s and it is shocking to see how your communities have degenerated. I blame Marxist democrats and their ramming the Civil Rights Act and the Immigration Act of 1965 down our throats and turning marauders loose on the streets of all our communities.

Hey, folks, this is one of the very best that the Dems have to distract us from reality. What does that say to you about the future of the Party?

Abrams should be a Census taker for a while.

She and Mooschell would look good together doing the Ubangi Stomp.