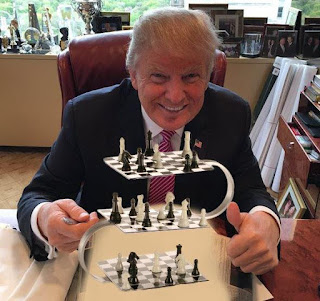 Most Americans didn’t see what Trump did at SOTU and you were looking right at it!

Trump sent a copy of his speech to the Democrats, who immediately wrote scripts to trash his speech before the address and right after the address based on The Copy he sent them. Then he gave a completely different speech. All their rebuttals were 100% off base!

That’s why Nancy Pelosi was looking at all that paper during Trump’s speech, because she realized she got sandbagged by the master. Trump didn’t put into his copy given to Democrats anything about Buzz Aldrin, the cancer child, the ICE agent, the military men, the ones everybody applauded. Because he knew that they were geared NEVER to stand and applaud no matter what he said. But to not clap for those heroes showed them as evil.

Then he pointed out the ladies took 58% of the seats in DC and all those libtards in white stood up, remember what Trump said? “Hey, 'You weren't supposed to do that!', remember?”

Now social media is killing the Democrats for only standing up for themselves and not ANYTHING else to help America.

Great SOTU. Showed the Democrats for what they are. A bunch of Socialist Anarchist.

They got trumped
Great job there President Trump
MAGA!
Love it

Best news I've heard all day. What a winner Trump is.

shows what fools they are!