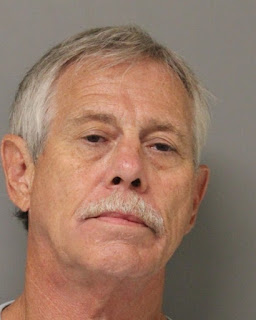 Delmar- The Delaware State Police have arrested a Salisbury, Maryland man after he entered into a residence uninvited and assaulted a resident.
The incident occurred on Tuesday, September 4, 2018 at approximately 10:50 a.m., when Troopers were dispatched to the 12000 block of Line Road for a report of an assault.  Prior to the Troopers arrival, it was learned that a 65-year-old male victim was in the process of being transported to the Peninsula Regional Medical Center.  Contact was made with the victim at the hospital where he indicated that an acquaintance, 66-year-old William D. Betts had entered his residence unannounced and began arguing and threatening to kill him. Betts soon after left the residence and entered the victim’s detached garage where he began pushing items over.  Betts obtained a crowbar and a screwdriver and proceeded back into the residence.  He continued to confront the victim, striking him over the head with the crowbar and threatening him with the screwdriver, prior to leaving the scene.
The victim was treated and released from the hospital with non-life threatening injures.
On Wednesday, September 26, 2018, Betts turned himself in at Troop 5 where he was charged with the following:
Betts was arraigned before the Justice of the Peace Court 2 and released on $58,100.00 unsecured bond.
at 9/27/2018 01:05:00 PM

Local stupidity. Nothing to see here. Move on to things that matter in the bigger picture.

Assault with a deadly weapon. Threatens to kill a guy and is released on an UNSECURED bond. WTF!

The two men involved have been friends for over 50 years. They are at odds over a debacle involving a tree.
They have let their tempers and egos get in the way of resolving the matter.
And now it has come to involving the law.
I can say that the victim in this incident probably could not have been injured by the crowbar because his head is too hard. However it is time for them to go to civil court and have a judge settle this matter.

Possession of a deadly weapon can mean any item that can cause death when used against a victim. You name it. Let's start with toothpick.


Would have never thought Billy would do something like this...

I graduated with Bill.Totally out of character for him.

Must have voted for trump

Na. Likely too stoned to put his slippers on that day.

Terroristic threatening is an odd charge. Did he have a political motive?