22% of US population does not speak English at home 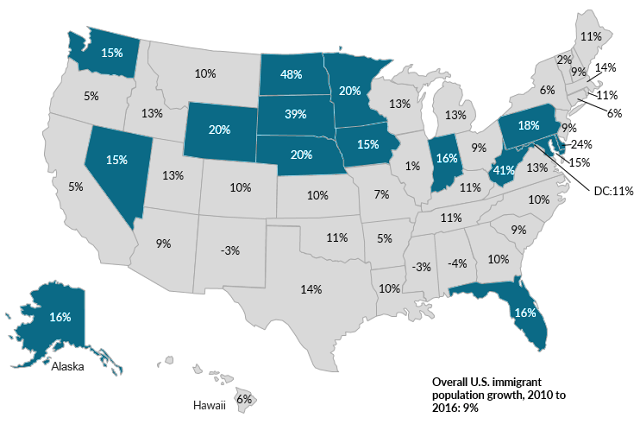 Some 13.5 percent of the U.S. population -- 44 million -- is foreign born, the highest level ever, and many are not proficient in English, choosing to speak Spanish at home instead.

A report from the Migration Policy Institute found that 22 percent of the U.S. population does not speak English at home.

The share was highest in Nevada at 31 percent and Florida at 29 percent.

They should go back!

Part of the George SOROS plan.

That percentage is workable, but we as a nation should not permitted to creep higher.

Majority of other 88% is too stupid to learn another language

Are Ebonics and Ghettospeak considered to be forms of English?

That percentage will drop by the time Trump is done.

I live in Frederick County MD. August 2015 a English only ordinance bill was up for repeal. It had been passed in 2012. After debates and concerns of local people the democrate commissioners voted NO to the English only bill. A young women in her mid to late twenty's against the bill needed a translater to speak and translate for her. Image that. She was here for ELEVEN YEARS at that time and still didn't speak english. This just shows they don't want to assimilate or accept our culture and way of life. They would rather change our way of life and culture to cater to theirs. We are being invaded by other cultures and our own is disappearing.

I bet the ones in the Northern Midwest come from Muslim countries.

Time for ICE to make some deportations.

The Migration Poicy Institute? I would take anything they say with a grain of salt. They are an agenda based organization.

It was much the same in the 19th and early 20th centuries as immigrants from Europe made their way to the U.S. The German/French side of my family arrived in 1820 and didn't speak English in the home for another forty or fifty years. Church services were in German, there were newspapers printed in German, store owners spoke German, etc. Entire sections of cities were the same, with native languages in use for decades upon decades. These predominantly included German, Irish (the home language), Chinese, Japanese, Polish, French (look at Quebec and New Orleans), etc.

Not exactly what Teddy Roosevelt talked about, huh?
Assimilation?
LOL!
Some have family members that speak NO English. At all. And have lived here for 30 years.....

Wow.
I am IMPRESSED by someone who knows what language was spoken in the home of their ancestors TWO HUNDRED YEARS AGO and how long it took for them to start speaking English in that home, too.
That makes Ancestry.com look like beginners.....

10:50 the map doesn't portray the headline. The map is overall immigrant population growth from 10-16.

6:15 in the early 19th century German speaking Americans outnumbered English speaking. After the early colonization period of what would become the United States the majority of immigrants were from the European continent(with the exception of the slaves from Africa which was forced immigration). From western PA through the Ohio valley all the way to the Mississippi river was settled by Germanic and Scandinavian people and of course a large portion of the land to the west of the Mississippi belonged to France until Jefferson bought it.

We take over your country soon amigos haha.

No and neither is hillbilly grunts

What exactly is your culture?

I would happily live with a Muslim or immigrant with an accent who didnt learn English as a first language over any of you close minded shorebillies. It is natural for you to fear what you dont understand.

What is your concern with someone speaking a language other than English?

I'll bet you come from a long line of racist hillbillies

9:pm it's still called bs if the numbers don't match the headline!
or is that to hard for you to understand? figures lie and liars figure!

7:25 No it is called lack of reading comprehension. It is snowflakes like you who only read headlines and look at pictures without actually reading the article that have gotten this world in the shape it is in. AKA low info voters.

Fear?
No one I know is AFRAID of these people.

People who come here should learn to speak English in addition to their language..if I moved to Spain I would have to learn spanish not hope they will accommodate me.