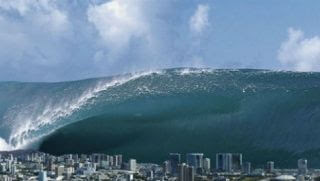 Many progressives are beholden to the notion of man-made global warming and are firmly convinced that human activity is rapidly heating the planet in such a manner as to cause irreparable harm and bring about catastrophic consequences.

This belief was fully evidenced in a breathlessly hyperbolic three-part series published by The New York Times focused the melting around the edges of the massive sheets of ice that make up Antarctica.

A team of journalists from The Times joined researchers in Antarctica to get a firsthand look at the frozen continent, and while they certainly brought back incredible photos, videos and illustrations, they also returned with an urgency regarding their fear that “Antarctica’s ice sheet may have entered the early stages of an unstoppable disintegration.”

what humanity ? there's no humanity left.

Genesis chapter 9 verse 11 is all I have to say. I never get on and quote scriptures but I had to.

Just because you're too stupid to realize or accept the science behind these patterns doesn't mean they aren't happening :)

OK Here we go again with displacement theory.
70% of the world is covered with water, but 98% is salt water. So, that leaves about 2% fresh and only about 2/3 of that is frozen on land.
So, do the math. If the sea levels rise by 1.4%, is that going to be catastrophic?!?! The floating salt water at the poles is already displacing water (think ice cubes in your drink), so if they melt a little, it is not going to change sea levels.
In my non-scientific theory, as temps rise, more humidity will be absorbed into the atmosphere and, in turn, will start to cool things off again. But who am I to propose a theory when all these scientists are drinking Al Gore Kool-Aid? They must be correct, right? Like the Earth was flat and the sun went around the Earth.
FWIW

Isn't this what the left wants.

2:16 there's a thing called rain. It's what happens when the humidity you mentioned goes into the atmosphere. Water also acts as a great insulator which means it can retain heat. As far as your theory on the sea level rise, head to google and look at the flooding in Florida. Finland. The Netherlands. I do want to ask who you are to propose a theory? Do you have any background in science or do you believe googling the percentage of fresh to salt water on the earth makes you qualified to make such statements?

Don't know about humanity but I'd pay big money if some apocalyptic flood would take out the New York Times, Washington Post, Politico and all the News Networks. Now that would be lovely!

2:08 You must just accept everything the liberal left throws at you. There is no scientific proof of man-made global warming or climate change. It is one of the biggest hoaxes ever. But you think it is scientific fact. It is nothing but B.S. shoved down your throat. Just like all the B.S. about our first black President being a forward step for race relations. Then Obama pushes race relations back fifty years. We were better off without Obama and we would be better off not to waste our money on scientific lies and untruths.

When the ice age ended, how many people lived on the planet?
Since global warming is caused by hydrocarbons and cow farts, just curious how they affected climate change back then.
3:52.. care to chime in? You sound like a scientist.

Berlin will be beach front property, invest while you still can!

From the people who can't get the 5 day forecast right...

"Global warming" is a stupid and pointless argument. Humans are going to destroy the planet eventually either way. Just a matter of time, and no politician or scientist is going to prevent it.

The military is warming the planet with weather modification.
That is not water vapor coming from the planes, it is solid material.
The ionosphere heaters are sending ELF through the aerosols to move the jet stream.
Our weather is no longer natural.

10:53 did they let you have access to the internet for good behavior, or don't the nurses know you got loose?