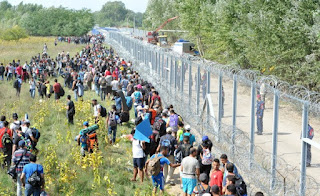 National culture and identity must be respected

I am intrigued by one aspect of both the Donald Trump campaign and the Brexit vote, namely the nearly fanatical vilification of the suggestion that a nation might actually seek to exercise some kind of control over immigration in order to maintain its cultural and religious identity. Both Trump supporters and Brexit voters have been dismissed by the establishment media as troglodytes, poorly educated ageing “white people” whose complete irrelevancy will be demonstrated when they all die off, taking their bigotry along with them. And may it come soon, according to the people who pontificate over such issues inside the Beltway and in the media.

Trump has even been attacked as “racist” for his wanting to deport illegal immigrants, something that is eminently sensible from a rule-of-law, national security and cultural identity point of view though practically problematic as there might be as many as 20 million of them in the U.S. If one does not believe that the schools and health care facilities in working class towns all over the United States have been negatively impacted by the wave of new and illegal arrivals one is either not paying attention or is willfully looking the other way.

I perhaps not surprisingly see the issue somewhat differently than the open borders or globalist crowd. We still live in a world of nation states, many of which have been around for a long time. Most have a dominant identity or unifying narrative which might well be ethnic, religious or even, as in the United States, cultural or institutional, which has sometimes been described as “civic nationalism.” In a country like the U.S. or Britain, where a form of democracy occasionally prevails, it would seem to me that the voters have a perfect right to demand that their government limit immigration both in numbers and by source in order to maintain the dominant culture. Edmund Burke once observed that “Society is indeed a contract … it becomes a participant not only between those who are living, those who are dead, and those who are to be born.” That means that a nation is both a compact among the living and a legacy issue for those who are to come. Being able to control one’s borders to include who can and cannot enter is an integral part of what national sovereignty and identity are all about.

People go on and on about diversity when what they're often doing is making an excuse for not becoming Americans.

Only Israel can be racist with its immigration policy.
All others must tow the line.