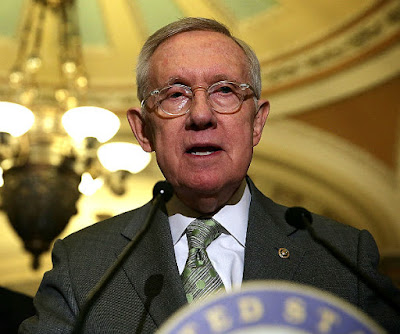 Blocking any of President Barack Obama's Supreme Court nominees would be "the most nakedly partisan" move Republican Senators could make in history, Senate Democratic Leader Harry Reid wrote in an op-ed for The Washington Post Monday night, and such a move could haunt them.

"Our founders who envisioned a fair, bipartisan process must be rolling in their graves," the Nevada Democrat said. "If my Republican colleagues proceed down this reckless path, they should know that this act alone will define their time in the majority. Thinking otherwise is fantasy."

If the nominee is blocked, Reid warned, the republican majority would be remembered as "the most nakedly partisan, obstructionist and irresponsible majority in history. All other impressions will be instantly and irretrievably swept away…[this] would rank among the most rash and reckless actions in the history of the Senate. And the consequences will reverberate for decades."

'dirty harry', get over your bad self...

so i guess harry voted for bork back in 87?

But when the Democrats did it it was for the good of the people!

haarey reid should keel over in his senate seat and make the world a better place,as did judge scalia

Reid & Pelosi, along with many others, cause nightmares for many people!!

Why is this puke in the news so much lately? No one's going to listen to him let alone hear him. He's a has been, a greedy liar and a degenerate POS who won't have a thing to do with Congress shortly.

"Our founders who envisioned a fair, bipartisan process must be rolling in their graves..."
I don't think so.
The President has a right under the Constitution to submit a candidate for the Supreme Court.
The Senate has a right under the Constitution to deny a candidate.
That's the way it works. That's the way it's supposed to work.
Our founders, in all their wisdom, are very pleased, I'm sure.

Hey Harry, I traced my family tree back to you... can you put some pork in another bill for me, so I don't ever have to work? Thanks cousin!

The Republicans are already haunted. And when Harry goes, there'll be another ghost in the chambers.


Harry needs his diaper changed; it's leaking onto his keyboard.

The President nominates candidates for the Supreme Court - true.

A surprisingly large number of Supreme Court nominees have not been confirmed - true.

Justice Scalia is not yet buried. Classless Obama brought the topic of a replacement up in his short, casual remarks after the death - true.

They ARE rolling in their graves, all right, Harry.
They never envisioned someone like YOU making a 40 year CAREER out of being in the Senate, or getting RICH beyond belief while doing it, and padding your whole family's income by getting them to be "lobbyists".
Trust me --- if any of them were still around, they'd be rolling YOU into a grave.
He's such a piece of low-life, lying, bribe taking slime, even slugs keep their distance from him.
The CIA was actually after him, and got Scalia by mistake.