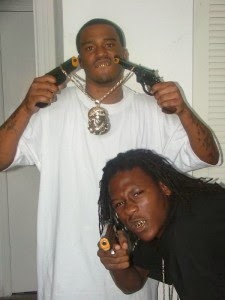 Street crimes units from around the US are making a startling discovery. Gang members are painting the ends of gun barrel orange. The theory is that cops will be slower to shoot because that orange tip is a signal of being a toy gun.

Officers working out of Los Angeles first alerted us to this over the weekend. But soon enough reports have also come in from Chicago, New York and Dallas.

Many realistic looking toy guns, such as airsoft guns, are increasingly using orange tipped barrels in an attempt to signal the weapon is a fake. The last few years have seen an increase of police shootings where after the fact it was established the suspect had a toy gun.

Gang leaders are apparently using this trend to embolden their troops. Z-Bazz, leader of the Lucas Street Lords, was willing to talk with CallTheCops.

Shoot first, then determine if it's real, or fake.

I got an orange tip too, right after I pull the trigger

The policy for LE should be then, shoot first and check to see if it's a real or fake gun later.

Time for a citizen's board with subpoena powers to oversee the gangs.

You can bet there will be weeping Grannies at their funerals

They may have toy guns, but their intention isn't to play.

This is why no one gets upset other than other blacks when one gets killed by LE or a white person. No one can say honestly that these 2 abominations serve any useful purpose to society. They are representative of nearly 100% of the murder "victims" and the lifestyle these "victims" aspire to, which ultimately causes their death.

@11:55 EXACTLY AND AMEN!!!!! If you are ADULT ENOUGH and RESPONSIBLE enough to pick up that gun, load that gun, and point it someone, be prepared for the REPERCUSSIONS!!!! Hopefully the officers will AIM FOR THE HEAD!!!!!

The point of tricking a police officer into thinking a real gun is a toy gun is to do harm to the police officer. If that's someone's goal, why worry if they get killed during their hoax? Clearly, putting the gun down is not what they plan to do when confronted by law enforcement.

Just last month everyone w a s complaining about officers shootings in salisbury and were fast to judge, today you're on their side and approve of them shooting people who point a gun. How will you react when they do. Sure wouldn't want any of you on my jury of peers.

I'd shoot these two first - even if their gun tips were painted pink!

1:59 Not "everyone". I approve of most police shooting, and a lot of the beating they dole out. You resist, or mouth off? Get your head split open. You point a gun at an officer, or use a car as a weapon? You get a third eye.

Yes4:13 I'm the 1:59 poster and I believe the cops have a difficult job, and decisions that must be made in usually seconds is being judged by people who have no law enforcement training (only what the see on NCIS, CIS Miami etc) and in most cases weeks to form a judgement based on so many facts mixed with non-facts and personal opinion. Most people really have no particular stance, they just add to the court of public opinion and show how incompetent the average citizen is.

Just for the record, 4:13, "mouthing off" to the police is a CONSTITUTIONAL RIGHT. But you advocate the police splitting someone's head?
How about some police training on self-control?
If someone "mouth's off" to you, do you have a legal right to "split their head open"?
How about siccing a trained killer dog on someone "mouthing off" to you? You good with that, too?
It sounds as if you think the "99% justified" figure the police give us for shooting (mostly) unarmed people is an accurate and reliable statistic. You couldn't get 99% of people to agree the sun is bright, but 99% of ALL police shootings are "justified"??
Really???? Do you also believe that the police NEVER falsify incident reports, never escalate a minor incident into a murder, never put a 'throwaway' gun on a dead suspect, never plant drugs on anyone, and never start trouble where there wasn't any to start with?
I don't think they do, either. Its those damn police reports, court testimony, and video that keeps messing my delusions up.....
Start thinking for yourself.