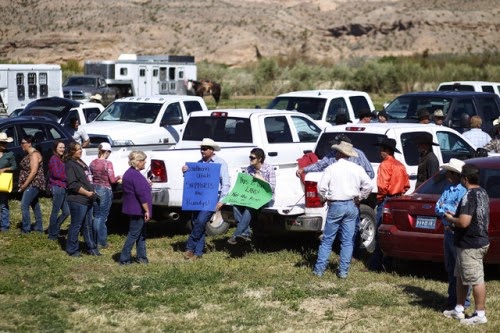 The Bundy Family, and the supporters on the ground at their Ranch, including Oath Keepers, have put out the call for continuing support. Needed are:

This will be a long struggle. The BLM and Harry Reid have stated that it is not over. We Oath Keepers plan on being there as long as it takes. Elias Alias, our Editor and Board member, is on his way to the Bundy Ranch today, for an extended stay. He's 67 years old, and a Vietnam Vet, who still heeds the call of freedom.

Men and women, from all corners of the nation, are rotating in and out of the Bundy Ranch. While they are there, they need our support. If you are going there yourself, please consider bringing extra supplies, such as the above. If you want to support our efforts with financial contributions, ($$), please click the link below to help.

The Bundy Ranch Facebook page has more than 94,000 Likes and the Senator Harry Reid FB has 59,000. People are commenting left and right on Reid's FB and aren't shy about telling him how they feel.

We need a militia here to provide security against the gang problem.

Those who donate should expect an audit by the IRS.

I keep on hearing and reading about instead of these strongarm tactics being used on the Bundy's the focus should be on the illegals. This is true and if anyone could see how the illegals have trashed the public lands along the Mexican border they would cry. You can go there and see it firsthand, illegals illegally camping among other abuses. Human waste and signs of fires, with cans and other unburned things in them. I just quickly googled and found an article stating in 2011 the EPA estimated they left 1000 tons of trash on public lands. Some of the areas look like landfills because of the heaps of trash they leave. Drug smuggling on these public lands is a problem and signs giving warnings that drug smuggling and illegals are in the area and to be conscious of this and do not hike alone on these lands are posted.
This land too is supposed to be managed by the BLM but they do nothing about the illegals trashing it.
The liberals who are so quick to condemn Bundy utter not a word on this destruction that is so apparent even though it costs more a year to clean up their mess than all of what they say Bundy owes them.

These people are traitors, should be treated as such.

12:55 pm You are the traitor and belong in prison.

12:55-Are you referring to the Bundy's as traitors? If so, please do not say this publically because it is clear the definition of traitor is foreign to you and you will save yourself the embarrassment of looking uneducated.
Now that being said, I will educate you. If anything, the Bundy's are the opposite of traitors. A traitor is someone who goes against their principles and these people stood up to their principles and their beliefs like nothing we have seen in a long time.

Traitors? The same term was used to describe Thomas Jefferson, John Adams, Patrick Henry, George Washington, and a host of others who risked EVERYTHING THEY HAD to resist a heavy-handed and deadly government.
Not bad company to keep, or be associated with...
I suppose 12:55 is getting a kickback from the land scam being attempted by his hero Harry Reid (and sons). Reid, who has 6 of his children working as lobbyists in Congress and has the audacity to say they "never discuss business between them" --- and 12:55 believes it!! -- lectures American citizens on the law and proper behavior. Like he knows ANYTHING about it.
Let something bust loose on the ranch. The Feds would have to set up roadblocks at every road into the state to stop all the citizens who would go there for the chance to show the Nazi's who is REALLY the boss.
Hint --- "we, the people".
Another hint --- they don't have enough troops to fight that fight. And if the nightly news happens to show cops or military troops opening fire on civilians in the USA, you better hope you've stocked up on some supplies.

12:55's opinion is tragically inane..but representative of the parasite left..

what is needed is for the Nevada Justice Department to extradite Harry Reid from his Ritz Carleton Suite on Mass. Ave in Downtown DC and indict him for Animal Cruelty Racketeering Slander and any other abuse of power issue they can come up with. Jail him and throw away the key

Funny how Harry Ried calls the Bundys "Domestic Terrorists", as he plundered and tried to destroy the Las Vegas food supply killing as he went, separating calves from their mothers, dug a mass grave to shoot dead (killed) cattle into while the Bundys and the Militias bravely fought for the animal's rights and lives.
The domestic terrorists are Ried and the BLM.

Harry Greed does not have a clue about ANYTHING he speaks. Why doesn't Harry Greed go to the Bundy ranch himself and say these things to their faces? He can even take John McCain with him. Two losers do not make a winner Harry Greed.

Oh, and you can take your eldest son too Harry Greed. You sad sack sorry s.o.b.

Anybody who does not pay taxes, pay fees or obey your laws is a domestic terrorist eh? Hell, I would bet at LEAST half of congress could fit that bill.

harry reid symbolizes the democratic party. A party of liars and hypocrites. He had nothing but praise for the Occupy Wallstreet protesters, hundreds of which went a rampage in Oakland. They vandalized, threw metal pipes, burning flares and exploding devices at police. They broke into a city owned historic building, cutting and tearing out electric wiring, spray painting walls, busting windows. Damage was millions.
Remember election time-The worst republican is better than ANY democrat and this is certainly true on a local level as well.

Unknown, I heard Reid say last night that Bundy didn't pay taxes, nor recognize the fed government. As far as the taxes I do not know but I think it could be the tax paid on the value of a grazing permit. Bundy's permit was cancelled in 1994 when he failed to renew, so he doesn't owe those taxes nor any fees for it from that point on. The money being tossed about that he owes is fines for trespass cattle.
As far as him not recognizing the fed govt that is a lie. He's not ever said that and is emphatic that he does recognize it.

It was very heart breaking to watch the BLM separate those babies from their mothers, and to see those babies hiding in the bushes because they were terrified.

you are exactly right...

From what I have read, he "fired" the BLM in 1993, stopped pay the fees and never applied for a new permit. He has offered to pay the state of Nevada the money he owes, but the state refused to take it, saying it belonged to the fed.

At this point, it is less about any fees and more about how the fed acted. Some are saying that BLM acted illegally and have no authority to do what they did, and should be disarmed along with other government agencies.

I agree with that.

Anonymous Anonymous said...
These people are traitors, should be treated as such.

Oh knock it off with the traitor bs. Most of you don't even know the meaning or how it is applied.

They're no better than the Taliban. Shoot them on sight. They are enemies of the United States and should be eliminated.

"They are enemies of the United States and should be eliminated."

Interesting point-of-view, 11:33. Care to share the FACTS that led to that conclusion? Or are you just another 'tolerant' liberal democrat who feels that taxes, death and imprisonment are the only solutions for those who don't follow the party line?

Unknown, the court order was only about seizing the cattle and nothing about dismantling nor seizing the equipment related to the cattle operation. Without Court authority the BLM destroyed the water supply so this gives Bundy cause to file a lawsuit in the US Court of Federal Claims. Bundy WILL win.

11:33 must be referring to the federal agents.

Laughable....the guy breaks the law....doesn't pay his just dues and then wonders why the feds show up......doesn't sound like much of a story unless your a uninformed drama queen like these militia fools....next real story please. ....

Question for you 9:29. Warren Buffett owes huge amounts of back taxes. Exponentially more than the fees owed by this rancher. You think SWAT teams are breaking down his front door? Maybe you can explain why the govt doesn't have Warren's house ringed with snipers. You sound like a clever little fella - maybe you can explain the distinction.

Anonymous Anonymous said...
Unknown, the court order was only about seizing the cattle and nothing about dismantling nor seizing the equipment related to the cattle operation. Without Court authority the BLM destroyed the water supply so this gives Bundy cause to file a lawsuit in the US Court of Federal Claims. Bundy WILL win.

I am familiar. I have been following it on fb.

Anonymous Anonymous said...
Laughable....the guy breaks the law....doesn't pay his just dues and then wonders why the feds show up......doesn't sound like much of a story unless your a uninformed drama queen like these militia fools....next real story please. ....

Obviously you have not been following the story and are uninformed about it.

9:29-Get with the program before commenting. Regardless of what you are hearing on the MSM, read the court documents for yourself. This was about cattle considered trespassing. He didn't apply for a permit in 1993 and it was cancelled. He wouldn't renew his permit, because they kept on lowering the number of cattle allowed to graze. He couldn't have paid, even if he wanted to as the permit had been revoked. A permit gives someone the right to do something that would other wise be considered illegal. So this is about trespass cattle.
The question is why then, isn't Bundy being charged criminally. It's because the burden of proof is higher in a criminal court. The feds don't even want to go that route, no doubt because they wouldn't win.