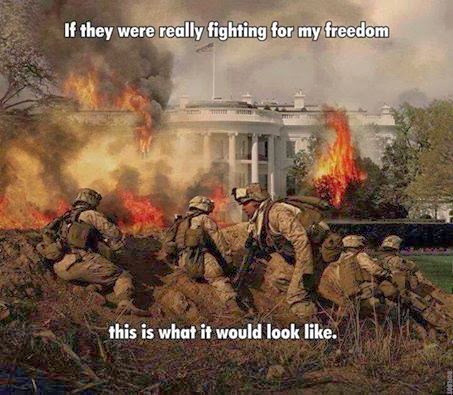 WTH is this treasonous garbage? What would you have thought of this same picture if it was GWB in there? You don't like what's going on in the White House GET YOUR GUY ELECTED. This picture is no better than Taliban propaganda. You cowards make me sick.

You Marxist traitors make me sick 12:49!
But I guess I shouldn't be mad with you, I should understand you're to stupid to see what is really happening in this country.
You've been conditioned by their incrementalism and bit by bit takeover of our Government and the willful disregard of laws and the Constitution.
The fact is more taliban and Muslim brotherhood operatives have been invited to the White House than ever before in history which is treasonous as they are our enemy.
Wake up fool.

That might be the only way we stop this Madman from Kenya.

I am watching that very movie right now...

12:49 would have informed the British on the whereabouts of Jefferson and Washington, if he could have.
Bet his ancestors did, though.
Elect some new people? LOL! We keep doing that and they keep lying, cheating, and stealing (and killing, imprisoning, and ruining lives (IRS, eminent domain, EPA, etc.).
Keep cheering.
That picture SHOULD have some men and women in jeans and t-shirts burning that place to the ground. Which, historically and inevitably, WILL happen. They KNOW it and are preparing as fast as they can and are counting on people like 12:49 to believe they aren't. Start paying more attention....

12:49 - YOUR guy had voter fraud committed on his behalf - at least one person was incarcerated for the crime and her release was celebrated by throngs of elected Democrat morons - just like you!

Cowards 12:49? Really? I've spent more time overseas in combat over the past 5 years than most and you refer to me as a coward? How much time did you spend in the middle east? Coward? I agree with this post. I'm a fan! Look at whats going on around you. There is no escape from the horrors this muslim has created. You have no idea how hard things are getting ready to get. When this all unfolds you will be begging for a coward like me to save you and your family. YOU asked for this and you will reap the rewards of your actions and beliefs.

In response to the caption; yeah, this makes perfect sense, because it's not like you can go to the polls in Nov. and make an informed decision to vote who you want to lead

we lost our coting rights decades ago. between fraud and outright lies, the powers that be will continue to hold this country. no one can PROVE election fraud when its a secret ballot.

All you armchair warriors on htis site make me sick. All you do is bitch and moan about the muslim in the White House. I heve news for all of you but you know it's true already, you are all cowards that would piss themselves at the sight of any armed encounter. Sedition and treason are capital offenses in this country. Go back to the coardly den you call home in your pathetic doublewide and STFU.

Everyone complaining about this picture, pretend it was made back when Bush was still president.