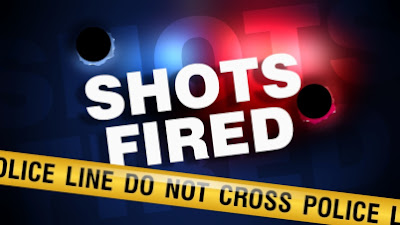 As the resident started approaching the suspects they jumped in their car and started heading directly at the resident attempting to run him over. The resident, (who has a right to carry) called 911 and pulled out his weapon and started firing shots at the vehicle. One bullet struck the rear window.

The vehicle made it to Rt. 54 where they took off east bound at a high rate of speed. The vehicle lost control at Guy Ward Road and wrecked into a ditch.

The Maryland State Police did not arrest the resident but they did confiscate his weapon for evidence. They confirmed the residents story and found 11 rounds on the ground where the suspects tried to run him over.

I'm told the Delaware State Police believe the two suspects were involved in a crime spree of stolen metal throughout the state.
at 5/05/2013 08:00:00 AM

Kudos to the resident!

I hope he got a receipt from the cops for his gun; things have a way of getting “Lost” in property rooms. I also hope he has a few more guns, because now he is basically unarmed and the crooks friends know it!

Glad no innocent people got shot....11 rounds, at a fleeing suspect and not arrested.... crazy....

Thats one for the good guy HaHa!

11:03 you sound like an idiot liberal. They sbould not have even taken his gun. The article said the vehicle was trying to run over him. How would you fight against a 4000l pound weapon coming at you.

One for the good guys!!! Hoping his weapon is returned quickly!!

11:12
Not by shooting out the REAR window after it has gone past me!

Obama Not So Good Motors said...

11:52 you mean to tell us, if I was to flee from the Police, they wouldn't shoot my rear window? You must be smoking something or just being a braindead idiot, which one is it? I guess it was you in the situation, you would just lay down in front of coming vehicle and hope it wouldn't run over you, right? Kudos to the shooter, just an advice - get more target practice.

11:52
Ever thought that MAYBE they were going in reverse when they were heading towards the man? As in backing out of the driveway? I agree that shooting someone as they are leaving probably is not the right thing to do. However we don't know all the information for me to say whether they were right or wrong with their actions.

10:03 You have the resident confused with LAPD and NYPD.

great job and good shooting...shame you did not hit the gas tank...save the tax payers some money in court.

He should have his gun returned to him today! It never should have been taken in the first place! He used it legally, and should be able to do the same thing today,

Anonymous said...
you don't get out of your vehicle you stay put and call the police that's how

And when they finally show up, who knows when, they will be long gone and the victims memory is starting to fog. He was protecting his property from being stolen. Then he was protecting hisself when they tried to run over him. He was probably nervous at this point and shaking which threw off his aim. He needs to go to the range and fire off a couple of boxes of ammo, if he can find some. Shooting the gas tank works in movies but rarely in life. More than likely it will just leave a trail of gas to ignite or follow. But it would cause them to run out of gas, if they didn't wreck.

Windshield, side windows, door if gunshot can go through it, tires and rear window. Even radiator is better than not hitting anything.

But I assume he did the best he could under the circumstances. At least he did SOMETHING. Not just sit in his car and watch them drive by with his property in their car.

The cops can file a report when they show up. You have to take care of yourselves. There is no one else to do it nor anyone better able. Fight back and make it more trouble for them than it's worth. Let them go target the ones who don't and won't own guns. They can throw a law book at them then duck back down behind their steering wheel waiting for Barney and Goober.