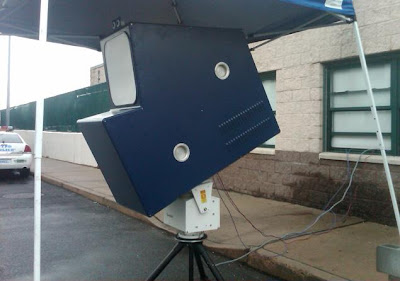 The device, which tests for terahertz radiation, is small enough to be placed in a police vehicle or stationed at a street corner where gunplay is common

Watch out we might get a grant to put one of those on that new fireboat!

That money from homeland security would have been better spent with assistance to local police departments that have lost funding in recent years. Didn't the Sheriff's department budget get cut $1 million?

When will this ever end.

When will this ever end.

When WE stop it!

Because we have so many lemmings who think that if they aren't doing anything wrong then why worry, it will NEVER end. Peacefully, that is. They are, for the moment, just being proposed for use on corners where "gunplay is common" (??) If its so common, where are the police, if it's so "common"? But, like Nazi checkpoints that were so gleefully cheered, these will be EVERYWHERE soon, too. Universal surveillance, eavesdropping, roaming scanners and checkpoints, drones, satellite tracking, and photgraphing of everyone who appears in public, not to mention "detention" without charges, secret trials and prisons, and widespread warrantless searches. I wonder what the founders of this great nation would think of all of THAT? How many of you sheep and lemmings REALLY believe all this is being done to find TERRORISTS? Huh? Probably the same number who think their elected "leaders" are interested in their safety and didn't go behind the door and erupt in gales of laughter after they swore their oath to uphold and defend the Constitution. Then went and voted for the Patriot Act and the NDAA.

the revolution is coming!