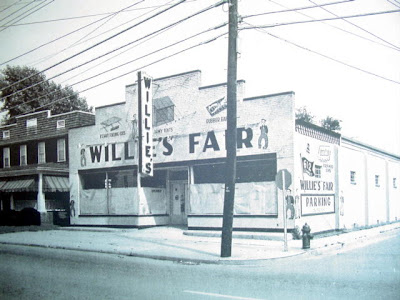 Since I was just your average boy in the 1950’s, I was fascinated with anything to do with war, guns and the associated paraphernalia that went with them. The Korean War had ended in 1952, and there were a lot of surplus military goods to be had. Salisbury did not have one of the big outlets as did Baltimore and Philadelphia. They had branches of a chain known as “Sonny’s Surplus”. They were huge stores and I am sure they had much more to offer than our little surplus store. Since none of us boys had seen a Sonny’s Surplus, we thought what we had was the cat’s meow.
I was solidly into my “cowboy” years and this was a whole new avenue for someone my age to discover. We all had our pistols and holsters to play cowboys and Indians, but this was a picture into the regular lives of real soldiers. Salisbury had our own surplus store, and it was a regular Shangri-la to boys my age. Even the smell was foreign to us. It smelled of far-off lands and adventures that we could only imagine. That place was Willie’s Fair and they sold only military surplus. Naturally your mother never entered a place reserved for the sale of such things that only men would understand, which made it that much more special.
Being always the practical one, I bought a “live bait” box. I still have it. The price of fifty cents is still visible on it. It probably never saw any military action, but it was painted “O.D.” and came from that mecca of military memories – Willie’s Fair. O.D. actually stood for olive drab, but when Crayola made a crayon of that color and called it O.D., my sister and I proceeded to call it odor.
Willie’s Fair was located on E. Church Street on the corner of Records Street and the building is still there, although it is now used as a furniture warehouse. Just as the building is still there, so are the memories of those glorious days spent wandering the aisles, looking at all the gas masks, used uniforms, helmets and other goodies associated with the military.
I remember buying rubber balls there for nine cents. The man told me that they were used by the Navy for something. He wasn’t sure just what. They predated the super ball that became so popular with children but exhibited the same traits for which the super ball is known. They were about the size of a tennis ball and would ricochet off my front steps with tremendous speed. I used to play with one of those balls and my ball gloves for hours. It was good infielding practice.
I don’t remember when Willie’s Fair ceased operations, but they are listed at the 612 E. Church St. address in the 1961 telephone book. That was the year I graduated from Wi-Hi and I’m sure I had gotten over my fascination with war by that time and didn’t patronize them.
But to a 10-year-old boy, it was just the most intriguing place. I lived on the corner of Church and Truitt streets and walked the few blocks without the fear I would probably have today. Times change.

I also remember walking through that store. I remember the gas mask, and I vividly remember seeing the dark green all wool army blankets that they used to carry.

willie's fair was later located on rt. 13 in one of the buildings opposite baskin-robbins, and a bit north. i can't rememeber the name of the current business in that building. i used to go to willies after school in the early 80's and buy ww2 dated m1 carbine mag pouches for $1!! and of course i still have them:)

Actually it was Sunny's Surplus. I used to go to one of their stores in downtown DC when I was a kid.

All kinds of fascinating stuff. I still have an ammo box that we bought in the early 70's from Sunny's.

I remember everything about Willies Fair,but the 50 caliber machine gun in the window was my favorite.Gas masks,survival knives,army boots,canteens,and all sorts of military clothing.You name it they had it.George,I'm sure you were there before I ever was,but I would say I started going in the late 50's.They even sold military rifles.You may have mentioned that.

As a young girl with a WWII father, we went to Willie's Fair all the time. It was so much fun seeing the surplus and having Daddy explain it's purpose. Thanks for the memories.

I remember Willie's Fair with fondness. At one time they had the top turret from a B-25 sitting on the floor, minus the guns, or course. You never knew what you would find there!

i can still sing their commercial. ill never forget it . a great store for boys and men. thanks sjd

willies fair was located on rt 13 were the bicycle shop just closed. it was a M.A.B paint store for a while before the bike shop was there used to hit it every saturday when we came to town along with the S+H green stamp store which was located were pasco has just recently moved from across from the college after that went next door to carrolls for burgers fries and shakes. boy salisbury used to be so grand