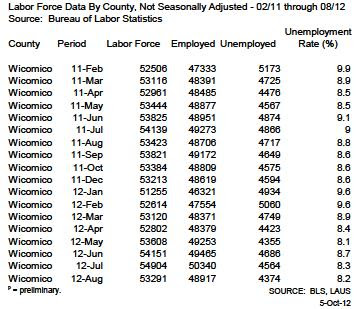 Latest local Labor Force Data released by the US Census Bureau this morning.
Wicomico has 132 fewer workers this year as compared to the same period last year - (08/12 verses 08/11).  Even though the unemployment rate has declined in Wicomico from 8.8% to 8.2% - the real indicator points to the fact that those receiving umemployment checks have now exhausted their benefits and still not found jobs.
This is a very alarming indicator as Wicomico's population growth has historically been approxmately 1% per annum or increased by about 992 people per year.  (Reference US Census Bureau 2011 Population estimate -  http://quickfacts.census.gov/qfd/states/24/24045.html)
Bottom line - the income tax collections - (Federal, State, Local) - will most likely be down as a result of a continuing sagging economy.  The fact is - Wicomico County is continuing to experience a loss of jobs and the job growth continues in a negative direction.
I am not making this stuff up - as the statistics shown in the attachment above are the actual statistics that have been extracted from the US Census Bureau data base for Wicomico County.

The unemployement rate is meaningless. It's the jobs lost and created that mean anything. The unemployment rate is based on who is collecting unemployment. Everyone knows (or atleast I hope they do) that these benefits run out and then those people who are still unemployed are not counted.
This is how obama plays on people's sheer ignorance. Anyone who is touting the unemployment rate as being down just needs to be dismissed as a complete imbecile.

They either exhausted their benefits or moved out of the county.

That will be the next mantra. "Not employed? Then move the hell out."

Everyone repeat this -- the unemployment rate isn't based on who received unemployment benefits. That's not how the government measures it.

Joe - I appreciate SBYnews putting up this information. Especially since this topic was discussed all weekend long on all of the major networks.

I think the Obama administration believes that most people are imbecilles and hope that the average Joe Blow only relates to the unemployment rate. But those who are enlightened by this type of information know the real truth.

This is absolutely great coverage. One can actually see what is transpiring in our economy as opposed to being deceived.

I swear - this media has got to be the best of the best. Great job!