More Bad News For Ocean City, The Shore & The United States of America 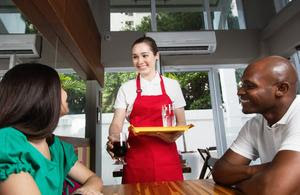 As many of you were aware, there's been an up in the air situation with J1 Students coming in this summer to help local businesses provide staffing positions of all sorts. While we have a contract with an outside company to lease the entire Alamo Motel this summer, other apartment complexes had also contracted in a small amount of J1's who had already been approved to come here.

HOWEVER, today we learned that one complex was just informed they will NOT be coming in but I think you'll be very surprised as to WHY.

Many would think it was because of the COVID-19. Nope, they were all willing to come here. Get this, they are NOT coming because of all the RIOTS in America happening right now! That's right, small and large local businesses will be desperate to fill these positions and of course PAY EVEN MORE MONEY to get whomever and whatever to fill these positions, as if being closed down for months wasn't bad enough!

So thanks to the Liberals, ANTIFA, Black Lives Matter and all the rest of the non Americans destroying America at this very moment we are now the laughing stock of the world. One can only hope the J1's we have scheduled do in fact come in but time will tell. Sorry for the bad news Ocean City.
at 6/02/2020 01:19:00 PM

What are you talking about? It was announced in April that they would not be coming.

You can go in an sit in Del why not MD.

Its June 2nd and there remains "hope" for the J1's to arrive?

I "git" J1's are truly paid less and their accommodations are not to American standards - yet the opportunity for friends from other countries to come here - most times is much better conditions AND opportunities from the countries they originate.

No contingency plan these days (not saying anyone doesn't have one) but that lack of thinking needs to be thrown away permanently.

Past practice is now failure today.

July 4th weekend is 5 weekends away.

Going according to plan - ruin America so it can be 'reformed' to the left's liking.

Adolph Hogan loves that decision. Now he has something to blame his incompetency on for business failures. Hogan, aka Hitler, will be like Cuomo it wasn't my fault it was the Federal government mainly Trump.

This is being done on PURPOSE When will PATRIOTS wake the F UP.

Oh my dear! That means healthy young American kids need to go out and get a job as there will be plenty open by stopping immigrants from taking them.
Seriously? I worked for $1.50 an hour pumping gas when I was 16 and was proud of it. Other friends worked in the fields harvesting melons, etc. And were proud to be working.
Get these kids butts off the couch and to work.

long story short...we can't exploit white foreign workers in OC because they are afraid to come to the US where other white people/police are committing genocide on black/brown people and so us white people have to pay people more money so its worth working in our racist area....got it.

With unemployment so high....WHO CARES ? Americans will soon be taking any job they can get. You'll have 60 year old servers at Hooters and 60 year old bus boys and dishwashers. I know the J1's are cute and those little accents exotic but we are not going to need them for a while.

So you will actually have to hire Americans if you want someone to work? Wow that's a real novel concept!!!!!!

If the Americans were so abundant to fill these jobs then there wouldn't be a j-1 visa program. Wow that's a real novel concept .........

1:33, The normal volume of J1's was restricted in large numbers. I had announced that they weren't coming to the Alamo. We then hooked up with a different company who had a large group coming to OC and we were able to get a contract for them to lease the entire Motel. As far as we know they are still coming. It is another location that informed me, (1st hand information) that their J1's were starting to back out because of the riots.
2:40 and others, GIVE ME A BREAK! Healthy young Americans. please! More like pain in the ass millennials who's parents give them everything they want and will cry the very first day they are TOLD what to do. God forbid you tell them to put down their damn phones or they'll be fired, they'll choose getting fired.
3:52, You've never been in business so I'd recommend you keep your mouth shut. When everyone's prices go through the roof you'll be the first to bitch about that as well.
3:57 and the rest of you. So you know, I DO hire all Americans. However, many Boardwalk businesses, WalMart, Food Lion, Hotels and Motels hire J1's by the hundreds. My post helps represent everyone else. If you want your kids to be structured and end their shifts feeling accomplished and proud of what they do, send them my way. I will teach them teamwork and by the end of the summer they will be extremely valuable employees. Crickets!!!!

Someone with common sense. They come every summer and take jobs from American kids and people who are just looking to work. With 40 million unemployed, it shouldn’t be an issue finding staff.

Do you realize how much CURRENCY has been printed since the 1930s?

Joe most people haven’t a clue!!! They have there heads stuck so far up there asses!!!! I don’t care how much you pay American so called workers. First most can’t pass a drug test or have a driver’s license. They have more excuses on why they can’t do something. They don’t so up on time or bother showing up at all. Some relatives have died at least 3 or 4 times!!! Don’t get me going on there phones!! What we are getting coming out of collage and high school are the equivalent of 13 or 14 years 30 years ago.

I am 63 years old and have been working since I was 12 years old. Business owners and anyone in a management position is nothing more than a adult babysitter!!! All I can say is God help this country!!!

Hard to find Americans that want to work! I’ve worked and hired in both Salisbury and ocean city area and most that I have hired are quick to stop showing up and have a poor work ethic, not all of them but the large majority.

That's great news for all the newly graduated students who will need a job. I remember not to long ago Americans working in Ocean City. I agree they probably won't work as hard as foreign students but crowds will probably be less overall. Lets keep American jobs in America!

It’s ridiculous oc hires so many J1s to save a little taxes... especially when most local businesses are trust fund kids playing owner.

Can you hire my boss? I want to see him become even a mildly valuable employee.

You probably still fully support Trump and his anti immigration policies. Only seem to care when it hurts your wallet.

I bet you could blame the liberals for anything your pea size brains can conceive. Try watching less conservative tv and think. Think about the reasons these people are marching in the street.

What the hell are you smoking?

Blacks are killing each other, and a hugely disproportionate number of white people too.