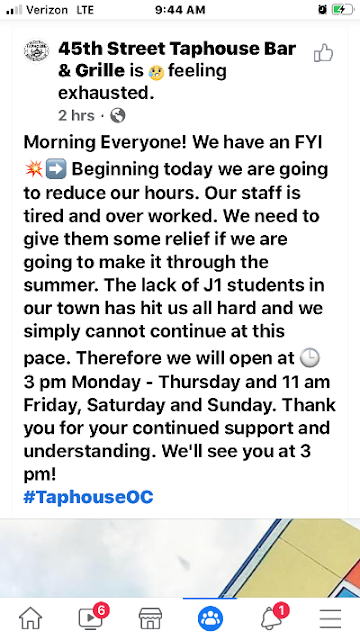 They all got completely comfortable hiring JI at low wages, lower payroll tax and easy hiring because they will take anything. Instead of hiring Americans, homeless, vets and overall aggressive recruitment instead they close the doors and save payroll. Growing pains of helping Americans first.

Money can fix that. Pay more, and more will want to work there.

Tip of the iceberg.
Two things to consider:
1. The real season hasn't even kick-in yet. Wait 'til next weekend! Add to that the possibility of Hogan allowing full 100% capacity at restaurants, and you have a major crisis. Almost all food service is having a hard time serving just 30% now.
2. The fact that you can double the amount of take-home pay over what employers will pay, just by staying home.

(A personal note to the people that think this is wrong to take that money from the government:
I do not blame the kids one bit. Not at all. People that work the summer at the beach aren't doing it as a career. Most just want to make enough to take a day or two off each week and hit the beach. Suddenly the government gives you a legal way to do nothing but swim and tan all day long - and pays you for it!
I have a strong work ethic, but I personally feel that these kids would be crazy to not take the money and run, run right to the beach and enjoy the summer! I would've certainly done it, too.)

You business owners don't get it that us customers would rather have an Amercan that speaks English serve us.

Give us the REAL reason for the cutback - not enough customers maybe?

Hey Yo,
You be Dissin us Black Peoples who come to da beach.

You best nots make us mad bro..
.. we break stuff up

Everyone wants their cake and eat it too. All trained by Rickie Beerinhan.

Great backup plan City Fail and business owners. Nothing is ever free.

4:43 said, "would rather have an American that speaks English serve us."

Believe me, so would the employers.
It IS a J1 problem, not a "BS agenda".
American kids want to work at the beach, but housing cost is a major problem. There is a very limited pool of local kids that can work in and around OC and not have to pay the cost of a place to stay.

By the way, you have to respect those J1's!
Do you think that you could go over to some foriegn country, get off the bus, get a job in a restaurant the next morning and take breakfast orders in Russian?
With only a year or two of English, that is what they do.

4:31 And they are requires to pay overtime after 40 hrs

The welfare and Independence Card gang been doin it they whole lives!

No Sympathy. I don't want the immigrants here. Pay a fair wage and get these kids working.
I've worked since I was 15. That's 48 years.
I was fairly paid and worked for what I made.
They need to do the same. Or just close down.
Stop with the poor boy crap.

No because we are the only country that gives a tax breaks to hire JI. Try being American and getting a job off the bus in ANY country it doesn’t happen because of borders. Only in the US.

So much for supporting AMERICAN worker's to get the economy kicking. They all have an excuse why they rather have foreigners instead of AMERICAN kids. But we all know why. Patriotic aren't they?? If your a dollar bill.

Here is the solution....increase the hourly rate!! Only reason businesses complaining is the lack of CHEAP college labor.....increase those wages so older people can afford the drive to O.C. Oh I know that cuts into the profits....hard to have sympathy for a business that operates 4 months then the owners are off living it up in the Bahamas the remainder of the year!! I have a tear in my eye......

It will take a couple years to ween these businesses off of the J1 teet. Then the labor market will be what it should be— jobs will be available to EVERYONE and wages will level up. I know people whose kids could never get a job in OC. They need to start advertising or have a job fair in Salisbury.

Housing is important too....there are 2nd 3rd and 4th order of effects to everything involving business....yet we vote folks in who....well don't plan for the worst or sleep it off hoping it goes away.

Worked before mindset uh....won't work in these uncharted circumstances.

One of the problems mentioned above is that there isn't cheap housing for college students to just come and work at the beach and a lot of people including locals don't want or do t have the transportation into OC. It's all well and good wanting to hire local, but there isn't public transport from the small towns into OC. Sure there are busses that probably go from SBY to the outlets, but not small towns. J1 students must have a job lined up and housing before they even come here. A lot of the students reside together in apartments around the boardwalk area and just use the OC bus to get around. Yes, it would be nice to hire local, but transport is a huge issue and Uber isn't cheap.

Laytons alwayed hired english speaking local kids. Did they hire all that was available? There must be more to hire.

Get a life racist white troll

All the racists are anonymous.... Go figure.

Those of you that say "pay higher wages", please talk to the people that say "Ocean City has priced itself out of the market" and see if you can come to some sort of an agreement.

Last summer, average hourly wages at the beach were $12 to $16 an hour, way above minimum wage, for Americans and immigrants.
Because of the J1 ban this summer, the average will be at least $15. Actually it is right now.

Lastly, "work four months and take the rest of the year off"?
If you invest your money; take a big risk; AND work 10 to 16-hour days without a break, without a day off for four months, then I would say you certainly earned the right to take some serious time off.
Talk to a school teacher sometime. They "only work 9 months a year", according to you.

Nothing racist as welfare and independence card users are all races. Unknown is the same as anonymous and now, same as hypocrite. Besides, if I sign my name, the lunatic left will try to get me fired and then I’ll be on welfare and using an independence card. Not interested.

I'm definitely a proud White racist 11:30. And "Unknown" means the same thing as "anonymous" as for as names go. If you want to be "not anonymous" stop hiding behind "Unknown" and use your real name. Otherwise STFU !!!!

If Americans were not sitting home collecting 1000 a week from unemployment instead of working there maybe enough people to fill these jobs.

Most companies have J1 students booked a year in advance. Americans never have a chance.

Did you ever think the students were the only ones who would take these jobs. Until you are a business owner in a seasonal business do your research before you make a dumb comment

It's a shame we aren't hiring mostly Americans for these jobs. You can barely understand the foreigners working there. Though housing is a problem what about all the people who live there in search of work? At least in America the foreigners are spread out but at the beach you now feel like you are in a foreign country.

No one wants a seasonal part-time job. The only Americans your going to find for these jobs is students looking for summer work. Or someone who is the secondary wage earner in a home with a strong primary wage earner.

All I can say is pay a living wage. If you knew what they got away with paying these visa students you would be sicked. So many things can be used to reduce their wages to the point even Maryland minimum wage seems costly.

If you notice they don't mention we can't find any Americans or can we get it out there we need employees. They just say we can't operate at these levels, and they refuse to spend money for real workers that cost way more than the visa students even just paying them min wage.

I was involved with a company that used these visas and know the direct and indirect costs and where the savings are. I don't have the time, but someone who's like me should put together some real world examples and show the greed linked to these visas.

Would you like your food to be served to you by a homeless person?

12:12 maybe you are in the wrong field....maybe the hourly rate should be $20/hr. You don’t offer any benefits....only a job! 10 to 16 hours a day for 4 months....dang you are over worked NANCY! Ocean City might have priced itself out of some markets....but that’s do mainly to taxes by the City! People there on vacation are going to spend and you know that or you wouldn’t have made a business investment otherwise!! So cry us a river for folks who work 6 to 7 days a week 10 to 12 hours per shift ALL YEAR!!! Not getting any sympathy here!!

When businessmen value dollars over public health you get this predictable outcome-reduced revenues.’

I have a few things to say. I have been friends with the family that owns the tap house along with many other things in Ocean City and elsewhere. I know the owner for over 35 years. He started with a tiny store at first street and the boardwalk. He has worked as hard as anyone I know and without prejudice. He literally employs a few thousand people in the season. Spend one week in his shoes and you can take your negativity back to your cushy little 40 hour a week job. Shame on you for your baseless assumptions.