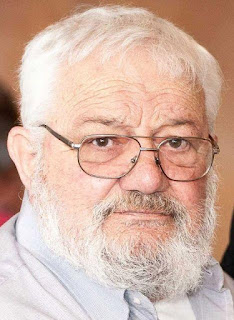 This is the obituary of Joseph “Joe” A. Heller, Jr via Robinson, Wright & Weymer Funeral Home:

Joe Heller made his last undignified and largely irreverent gesture on September 8, 2019, signing off on a life, in his words, "generally well-lived and with few regrets."

When the doctors confronted his daughters with the news last week that "your father is a very sick man," in unison they replied, "you have no idea."

God thankfully broke the mold after Joe was born to the late Joseph Heller, Sr. and Ruth Marion (Clock) on January 24, 1937 in New Haven, CT. Being born during the depression shaped Joe's formative years and resulted in a lifetime of frugality, hoarding and cheap mischief, often at the expense of others.

Being the eldest was a dubious task but he was up for the challenge and led and tortured his siblings through a childhood of obnoxious pranks, with his brother, Bob, generally serving as his wingman. Pat, Dick and Kathy were often on the receiving end of such lessons as "Ding Dong, Dogsh*t" and thwarting lunch thieves with laxative-laced chocolate cake and excrement meatloaf sandwiches.

His mother was not immune to his pranks as he named his first dog, "Fart," so she would have to scream his name to come home if he wandered off.

Takes one to know one

Obviously you have no sense of humor

There is always one person that has to be the jackass. Congrats 2:49pm. You win.

Aside from having a small measure of class for the family of the deceased (which clearly eludes you), this gentleman went thru life with a good natured sense of humor. Good for him.

His kids wasted a ton of money on that obit for their father, but if it made them feel better, so be it.

Stunning intellectual response. Right up there with "I'm rubber, you're glue.."

Wow, you played yourself lol

Ruth Ginsburg, 106 passed away today.
Lifelong Jurist and Supreme Court Justice,
Ginsburg was proceeded in death by her husband,
Robert, who reportedly died first, "Cuz he could".
Ginsburg is survived by her daughter, Lisa 78, and
4 grandchildren, 6 great grandchildren
and 2 great-great grandchildren.
Ruth graduated law school with fellow classmate,
the late Abraham Lincoln.
She enjoyed carpentry and helped Noah with the building of the Ark.

In her off time from sleeping in the court,
Ruth would grind her own wheat into
flour and baked bread. She loved pounding her clothes
clean in the stream behind her house.

He best friend, Hillary Clinton was by her side when
Ruth passed. Earlier that day Ruth had said she had
some disturbing news to tell Hillary and it was criminal
in nature. She had said it involved her Husband Bill.