Scientists on the trail of a soft-crab killer 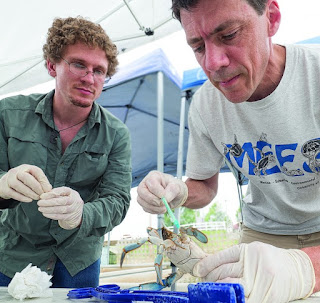 Researchers in MD, VA investigate virus that's taking a bite out of lucrative 'peeler' catch before crabs can shed their shells

On a warm July afternoon in a makeshift phlebotomy lab on Maryland's Tilghman Island, molecular biologist Eric Schott pressed a needle into 133’s squirming body, extracting a blood sample that he then placed into an ethanol solution. The blood would go back to his lab in Baltimore’s Inner Harbor. And patient 133, Callinectes sapidus, otherwise known as the blue crab, was returned to his shedding tank.

Patient 133 is part of Schott’s decade-long quest to learn more about a virus that is killing “peelers,” the term for crabs that are about to shed their hard, outer shell and become some lucky diner’s delicious soft-shell crab meal. Though they comprise only about 5 percent of the Chesapeake Bay’s blue crab harvest, which had a dockside value of more than $100 million last year, soft crabs are extremely lucrative. When sold, they fetch three to six times more per crab than hard crabs, and they are gaining in popularity nationwide as a delicacy.

The locals are losing to asian imported soft crabs.

5:33 Locals know better. Plus, no they are not. They can barely be kept stocked. The locals are losing to what the post is about. Disease.

I heard that a shipload of Viagra sunk off of Ocean City & because of that there would not be any soft shell crabs for at least 2 years.