Get Ready! You Don’t Want to Miss the Brightest Meteor Shower in Recorded Human History! 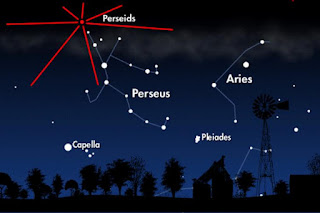 A powerful, as in fact, the brightest meteor shower is about to happen, and you don’t want to miss it!
A meteor shower is a celestial event in which a number of meteors are observed to radiate, or originate, from one point in the night sky.
These meteors are caused by streams of cosmic debris called meteoroids entering Earth’s atmosphere at extremely high speeds on parallel trajectories. Most meteors are smaller than a grain of sand, so almost all of them disintegrate and never hit the Earth’s surface.
What’s even more exciting, a meteor shower is about to take place on 12th of August, 2017, but it’s not just a regular meteor shower. Astronomers suppose that this will be the brightest meteor shower in recorded human history! It will magically light up the sky, and some of them might be visible even during the daytime.
You just don’t want to miss this. Why? Because probably you won’t be alive in another 96 years to wait for the next one.
More
at 8/11/2017 05:30:00 PM

Brought to you by North Korea

They say this every year. "Greatest meteor shower ever". I've gone out a couple years. Never saw more than 4 or 5 over the course of an hour or so. Simply not worth getting up to stare at the sky looking for all these meteors that do show.

Pack a picnic, throw a blanket out somewhere wher's there's not artificial light pollution and enjoy. It's free and extroidinarly beautiful.

And i have watched it the past few years and have enjoyed the shower.

The one about 12 or 14 years was pretty spectacular. I watched between 3 and 5 am and saw quite a number of them.

I'll watch it on you tube.