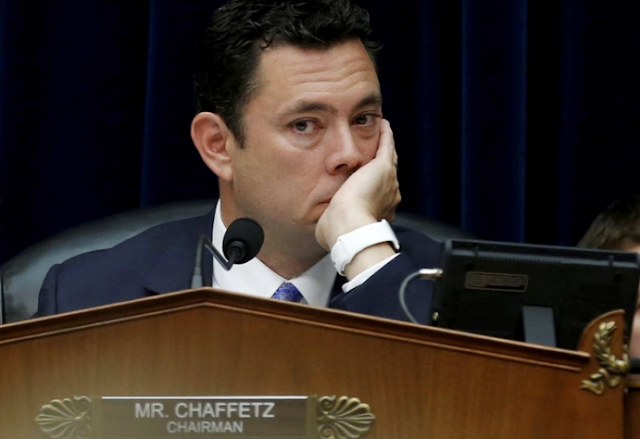 Many senior and long-time staffers of the House Oversight Committee plan to walkout when Congressman Trey Gowdy takes the gavel over from Jason Chaffetz. Gowdy, who led the two-year House Benghazi probe, has secured near-unanimous support among members of the House Republican Steering Committee as well as Speaker Paul Ryan.

Additionally, Jason Chaffetz has not been seen at work "for three months" and generally only appears when cameras are rolling.

Chaffetz made a shock announcement to retire from political office in 2018 and not run for re-election, after serving 5 terms representing Utah. Chaffetz gave no specific reason for the timing of the announcement, stating he would simply return to the private sector. The announcement came at a time when many ere watching the House Oversight Committee closely for its hearings with former FBI Director James Comey, and its oversight role in the Obama NSA abuse scandal.

However, as Chaffetz plans to leave within the next few weeks, many staff plan to leave with him. Many of the staffers leaving have ties to Chaffetz and are in fact fellow alumni of Brigham Young University. Many on the Hill refer to the large number of BYU alumni serving in federal government as the "Mormon mafia."

The staffers claim their walkout is not necessary in solidarity with Chaffetz, but more a pre-emptive move because they strongly suspect Trey Gowdy will make changes, or fire a lot of senior staff...

They can all walk. Gowdy needs his own team in there!

Fire them if they walk out.

And they will want to dive back in when they find out what private employers pay.

Those clowns can see the writing on the wall.....

The children of the house must play

If they aren't performing they need to go . I support draining the swamp.

Man I can't get over the fact they get 172K from our trough. Look at some of the dummies on board. This doesn't count what the steal.

Bring in some fresh talent.

Every time a report uses the word "massive", I know it's an overblown story.

Anonymous Anonymous said...
The children of the house must play

and fools must watch

Something 'fishy' about Chaffetz leaving so abruptly...is he being blackmailed as so many others? Things don't add up here. I am grateful Gowdy is taking the reigns because he is much better at this job...a great pit bull that seeks for Truth!!!

Chaffetz is a disgrace to Congress and should have been expelled after that dog and pony show last July during the initial hearings about the Clinton Email Investigation. Congress can recommend criminal charges even when the FBI fails to do their due diligence, but Chaffetz sat on his hands when clearly many laws were explicitly broken. Shameful.

Let them walk. Do they think anyone will miss them? What do they will accomplish doing this? If they think someone will beg them to stay, they are sadly mistaken.

Let them walk. Do they think anyone will miss them? What do they think they will accomplish doing this? If they think someone will beg them to stay, they are sadly mistaken.

Bring on Gowdy. I hope they do walk out because they haven't done shit for America.