Constructions About To Begin on Route 13 (South Salisbury Blvd) 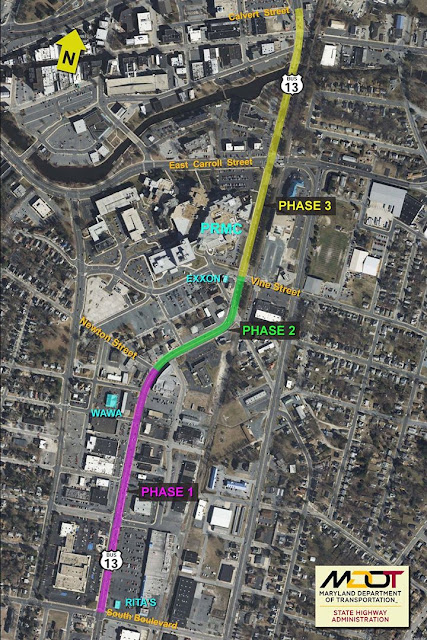 The construction will begin in early June and is expected to last 9 to 12 months; however, the project could possibly be extended once state highway crews begin work and are able to more thoroughly assess the infrastructure.

The construction that is to be conducted consists of replacing inefficient storm water drainage and adding new inlets, which will reduce flooding along the Business Route 13 corridor. In addition to the drainage system, state highway crews will also construct new sidewalks that will be compliant with the Americans with Disabilities Act (ADA). These improvements will result in safer walkways and a more superior drainage system, thus providing better roadways for motorist, cyclists, and pedestrians.
The project will be conducted in three different phases, mostly at night, in three different sections:

Phase 1: South Boulevard to Newton Street (from about Rita's to the Wawa)
Phase 2: Newton Street to Vine Street (touching the southern campus of PRMC/at Exxon Station)
Phase 3: Vine Street to Calvert Street (across the entire front of PRMC to approximately the Royal Farms store north)

At all phases of the project, NO DETOURS are planned and at no time will any section of the road be closed. However, crews will have traffic restricted to a single lane in each direction (north and south) on Business Route 13 in each of the phases. Additionally, crossover street intersections, like Vine Street at Business 13, will be shut down for a couple of days during that portion of the phase where work to put in drainage pipe happens exactly at that crossover point. We'll keep you updated as to when that will happen.

For that reason, PRMC is encouraging all of our staff members and our patients and visitors to avoid Business 13, in particular at the Vine Street intersection, to reach the hospital. We would encourage you to begin preparing for the roadwork now and to become accustomed to using these alternate routes of travel to reach the hospital starting today:

From the North: Use East Carroll Street to Waverly Drive and access the campus at Waverly and Vin

From the West: Use East Carroll to Waverly Drive and access the campus at Waverly and Vine

Surgery patients, Cancer patients and Labor and Delivery patients will still be able to reach their designated parking and entrances off Vine Street coming in from Waverly Drive. Additionally, as part of the project, PRMC will be permanently closing the roadway entrance to the Richard A. Henson Cancer Institute off Business 13. All Henson Cancer institute traffic will access their specific parking lot from Vine Street in the future. All ambulance traffic will also be following a similar pattern to reach the hospital during construction.

PRMC and the State Highway Administration will be doing our best to keep you updated throughout the project. PRMC will utilize our internal communication vehicles and also our social media and website to provide the most current updates on the project's impact on traffic flow around our campus.

When are they ever going to do something about the horrible road conditions on West Main St. Don't any of those businesses and landlords on that street pay their taxes? It is a heavily traveled street!

What pain in the ass? Route 13 is always in construction mode of one form or another. Look at downtown East Main. It's been torn up since October. What in the hell are these people doing that takes longer than it takes to build a house? Every time I go by any of these construction zones it's a bunch of people standing around talking while one guy works.

Bet the EMTs are just gonna love this sh--storm.

They could do night construction in the warm weather but no, they'd rather make traffic jams during our rush hour which is every day all day long because nobody works in Salisbury.

One upside is at least someone has a job for the summer.

Unbelievable what a waste of taxpayers money. This area has never had any drainage problems. How about finishing fixing Rt50 and all the other roads that need work and leave the ones that you have already fixed alone or better yet do it right the first time so it does not have to be redone. I hate Salisbury more and more everyday and I have lived here all my life. I sincerely hope the college and the hospital take over all of Salisbury because I for one feel that they have both destroyed Salisbury.

State Highway is at the behest of the paving contractors, weather, and infrastructure they discover as they begin their project.
There has ALWAYS been an issue of flooding along Rt.13. Some of the construction and repair work is Required by the Federal Government.
If this work wasn't done you would be complaining daily about the bad roads.
Go across the bay or travel Anywhere Else and tell me where they Don't have highway and road repair going on.
Get real.

Once you live in the shoes of..... That would be the positive comment of the day.

Working with SHA and or local work crews is not something that just materializes when convenient OR when one wants. Its planned, replanned, rehashed and when funds are available - BOOM work is initiated. Most times it is NOT the opportune time for everyone - but the work must get accomplished. We live in an environment (weather) that gives work crews only so many months to get the work done. They do have a priority to minimize disruptions, but most times it is disruptive nonetheless.

All infrastructure is a mess now, everything needs to be repaved, rebuilt or built from scratch. Challenge is funding and there is barely enough to get anything started on time, let alone accomplished.

At least there is movement, albeit slow. There are some states that started projects years ago that remain dormant because of lack of funding. South Carolina has many roads incomplete....

The on ramp to the bypass from Rt 13 going East (in front of the mall) will be closed starting June 9 for 3 months! They will be rerouting all traffic down Naylor Mill road to get on the bypass headed East. They are apparently replacing the entire on ramp, just as beach traffic starts.

Please just finish Rt 50 and give us a break for a while...what a disaster.

Getting to PRMC on an average day. Coming out of Pemberton Road turning right and run into road resurfacing. OK...note to self...go across the road up toward Isabella to miss resurfacing. Second attempt....that road is screwed up as well but hopefully you will make it in time....hang a right at Lake Street and BAM...straight into the backup waiting for the bridge to reopen after the flat bed boat passes in the middle of lunch hour.

This town is becoming a traffic nightmare and it just keeps getting worse and worse. It reminds me of going to Baltimore where they are constantly screwing up traffic patterns for any and all reasons.

ive NEVER seen it flood by the hospital, in any storm weve had here in the last 25 years

It will take them 4 years if we are lucky
They will have a crew of 3 working about 5 hours per day, 4 days per week.
It will drag on and on and on, so get ready.

With all the break-ins that are happening at PRMC in the parking lots I hope the crew doing the road work lock up their vehicles!

I agree with what has been already said finish East Main St one job at a time--this is not Baltimore no need to have too much construction for a small town and 4 years at that turtle pace of 3 people sounds like something Jake Day would have thought of.

So all the newly surfaced road on rt 13 will be torn up to put pipes underground. SMART.!!!

9 to 12 months my ass. When they were doing phase 3 from South blvd to College Ave that took almost 18 months.