Relatives Of Last Man Lynched In Md. On Noose Incidents: ‘The Message Is Stay In Your Place’ 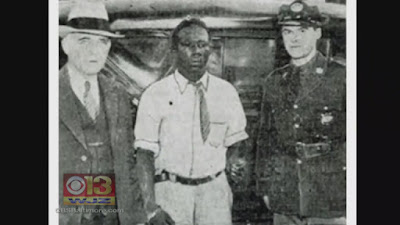 BALTIMORE (WJZ) — Recent incidents of nooses found on college and school campuses are disturbing more than students and parents.

Alex DeMetrick reports, for two Eastern Shore men, a noose is a powerful reminder of the last lynching in Maryland.

The historic jail in the Eastern Shore town of Princess Anne represents a painful history for Kirkland Hall and Henry Armwood. Both are distant relatives of the last man lynched in Maryland.

It was 1933. George Armwood was jailed for allegedly attacking a white woman. A mob formed outside the jail, before storming inside with battering rams.

The nooses that were found were placed by the students complaining, Their goal is to create havoc wherever they can to seek and promote racism under the guise of outrage.

SO, to make a connection they wheel out a story from 1933. Good Lord they are desperate.

“The message is stay in your place,” says Armwood. “That terrorist symbol, or the use of that, to keep us in our place. Doing what terrorists try to do. Intimidate and change people’s behavior through fear.”

Good grief. The chances of another lynching is almost ZERO.

The real problem is the persisting 'victim' mentality, and hanging on to this old kind of thinking.

Racism does still exist (and it always will by man's nature..), but the racism we most often see these days is from black people. Plain and wide open.

Just keep living in the past and we won't have to face the hatred that foments society now which is by far predominately black on white. Racist organizations should all be shunned including black panthers, kkk, nation of islam and ect.

some blacks dwell on the past...that was nearly 100 years ago....well, for that matter, When Lincoln freed the blacks, they began looking for work, and today nearly 150 + years later, they are still looking for a job!

9:53 where did you get this "Fake News"? They have been asking for a hand out for 150 years, and getting it from us working folks!

yeah, u are more accurate....I was mocking them looking for jobs while on welfare, Ebt cards, food stamps, sevtion 8 and the list grows daily

Truth is, many congressmen were upset with Lincoln freeing the blacks, and said if we don't ship them out of our country, we will be keeping them and feeding them forever!
Guess those "Old White Men" really knew their stuff, just like our "Old White Guy" President is so smart!

Zorro and 10:35 It is nice to see racism alive and thriving in our area. Lump all people with a darker skin pigment into one subsection of the population. Ignore the black people with educations, judges, business owners, surgeons, lawyers, engineers, scientists, artists, etc. Not every person of color is poor, uneducated, dependent on govt. programs. There are far more white people on welfare/EBT/SNAP in this area than black people but that is ok because they are republicans?

More and more Americans are marrying people of different races and ethnicities, reaching at least 1 in 6 newlyweds in 2015, the highest proportion in American history, a new study released Thursday showed.
Currently, there are 11 million people - or 1 out of 10 married people - in the United States with a spouse of a different race or ethnicity, according to a Pew Research Center analysis of U.S. Census Bureau data.

I tend to lean with Martin Luther King's ideology. judge a man by his character, however the twisted LBJs social experiment has been a great failure. It has done nothing but continue to incite hatred for people of color. This is due to the government's collusion to destroy the black family. Welfare abortion, etc, That's the bottom line. That's why we have problems with young black families & kids. Throw that on top of today's Godless egotistical, narcissist idealogy mantra. Then raised and indoctrinated in this system. You reap what you sow. I cannot help the past but hopefully we have learned from it. Time to go on and address the real problem. Supporting indepence in the form of Jobs or work programs but not handouts.

Thanks 12:19 for your voice of reason and human decency.

12:19
There are more whites in the area. Now break down the percentage of whites on welfare vs others and you will get a different percentage.