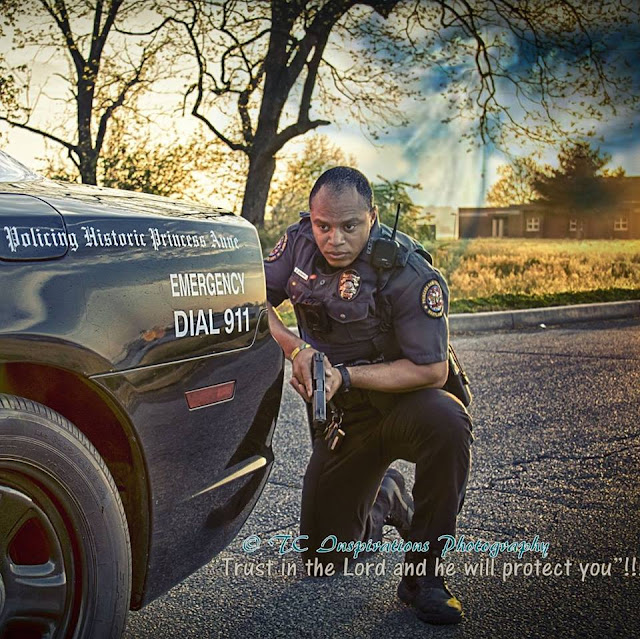 
I was shown a photo of a local eastern shore police officer that has posed on social media in such a manner than does not depict the best image of law enforcement. With the current climate against law enforcement to pose with your weapon drawn in view of citizens requires officers to have to complete a report and file a use of force report. This agency in particular has that same policy. The current Chief of the Princess Anne Police Department has taken part in investigations that led to the termination of a Somerset County Deputy by posting pictures of the Patch and Badge on Social Media. It seems unfit and unbecoming to allow such behavior to occur from an officer who continually acts in a manner unbecoming of a person who upholds the laws of the State of Maryland and the Town of Princess Anne. Some other actions of his that have been overlooked is unlawfully entering a residence and was found when the tenant returned home early.

Suck it up snowflake!...

You're such an idiot it's scary!! If the police offend you, don't call!

No such policy that if you draw your weapon you have to fill out a use of force report...lol...

The ONLY ones that have a problem with this are BLM THUGS Screw U.

You want your rights protected but know one else's.

Dear writer your village called and wants their idiot back

It doesn't look like there are people around, looks more like a parking lot to me. Either way, those guys take some good pictures of our local FD and PD. Get over yourself and quit trying to make everyone and everything else as miserable as you.

He is black so nothing will happen. If he was white with a short hair cut, probably riots in the streets.

Nothing wrong with that photo. Great officer shoeing some pride. Get a life! Must have written you a ticket, huh?

Wow! PA police allowed such a horrendously dangerous situation to occur? Life an property are at risk by such actions?

Got call BS on the whole post. Why would any sensible person care?

You liberals are just still so upset Hillary lost, you just dont know what to do with your time. Please - JUMP in the Ocean and take your friends..

NO ONE CARES - we are coming to take your pussy hats away.... LOL

Or maybe the photo was even taken during a training exercise. more snowflake BS

Had to play the race card didn't you.

This post is very confusing.Is it a PA cop or county deputy they are complaining about? Who is in this photo?

That's how they should exit their cars every time....guns drawn and ready to shoot!!! Thin out some of the THUGS and it won't be so dangerous for the Police in the future!!!!

He's mixed, I went to school with this gentlemen. He's a very upstanding guy! PA police are lucky to have him.

It's not confusing to an observant person. Perhaps you should look at the photo closely. It is clearly printed on the left quarter panel of the vehicle, "Policing Historic Princess Anne". The patch on his left sleeve says, "Princess Anne Police".

I hope the writer of this idiotic article doesn't require the police when he/she is being raped or badly beaten by some thug(s). Maybe then they will realize that a gun in a police officer's hand is better than a candy cane.

Somerset and princess Anne are doing calendar photos. I heard George has a bag of money in one hand and a time card in the other. Idk.

I think his name is George Nelson but not sure.

This is the best laugh I have had all day. Looks just like George Nelson!!! These photographers have been providing powerful photos of our law enforcement and emergency responders for years. Glad they are getting this hilarious free publicity!!!! Great photo TCI.

Thank you Princess Anne Police for your work in protecting my hometown.

I'm surprised nobody mentioned invoking the Lord's trust as a weapon is drawn. We need both in Princess Anne.

Be mindful a lot of black people don't want to be robbed or get their head thumped either.

While I myself beat up on police when they do bad things to citizens who don't deserve it, I also recognize the crap job they have to do with some that DO deserve it. And I am grateful that they do it to those that would otherwise do crap to us.

For example, the recent policeman of the year award went to a young cop whose contribution to law enforcement was to write the most tickets. Not very worthy in my opinion.

It should go to a cop who REALLY enforces laws that truly protect and serve. Cops will get dumped on no matter what, as I am sure I will too to some degree just for writing this but oh well.

If they want to enforce traffic laws that would really make roads safer, PATROL the highways and write tickets for really unsafe behavior like tailgating, blocking others in or out of a lane, weaving, etc.

Speed alone is not always an unsafe act. It happens every day on every roadway, even by cops themselves. Speeding tickets are viewed as generating revenue for the state and various other governments. Sitting behind a bush is not proactive in reducing crime. Patrolling highways, being seen, pulling over people committing unsafe maneuvers would makes others safer than pulling over people going a few miles over some limit. And it would still find criminals that the police claim they find by pulling over speeders.

I will continue to bash police whenever I see the need but I will also buy them a cup of coffee or a trip to McD's when the opportunity arises.

So, if an officer gets his picture taken at the range which is a safe place to do so, who gets offended. Military personnel get their picture taken all the time posing with their weapons and no issue. Fireman pose in front of a Fire Truck and no problem. So what is the issue here. Its clearly a photo shoot, in a area where the public is not a risk for (oh my an upholstered pistol). Grow up people find something useful to complain about.

Hah, that sure backfired. Didn't get the outrage you expected did ya??

5:39 I called Wink's in PA and they said all the upholstered pistols are on back order. It is a 2-3 month wait for upholstered handguns right now due to high demand.

Love this picture. thanks for posting.

The deputy that the writer of this post is referring to is Troy Durham; who was absolutely fired in part for posting pictures of himself in uniform on social media without the permission of Sheriff Jones. And the investigation was conducted in part by Chief Bozman. Many police departments, INCLUDING the Princess Anne Police Department have this same policy. You MUST have the permission of the Chief prior to posting. Maybe this officer did- but i agree; should this have been ANY other officer other than the one shown; the public would have had an issue. This officer just happens to have an amazing reputation. The Princess Anne Police Dept has been making some poor choices lately (i.e.- $40,000 in new uniforms vs. much needed repairs to the dept) and the public seems to be doing a lot of "overlooking" and excuse making. That's all well and good, but keep watching. A lot of little things will eventually lead to one big mistake.

Ofc Redding is a good officer he does many things for his community if his Cheif approved it then so be it....We need to focus on bigger and better things then a great officer having pictures taken ...Really !!!

Ofc redding is also chief of Princess anne fire company. He plays many roles in protecting your dumb as**. Grow up please . Great pic chief .

I find the idiotic reference to some make believe "God" more offensive that anything else in the picture.

Anonymous Anonymous said...
I find the idiotic reference to some make believe "God" more offensive that anything else in the picture.

Just as some of us find your 'idiotic' comment more offensive than anything else. So it all balances out in the end.

Most of our first responders including police are still good, they protect us and our property at a risk of their very lives. This country in the last 2 years has eroded the way we should support them, and when service is questioned let the courts decide not burn down cities and properties, and killing innocent people.

This hot shot is also Chief of Princess Anne fire department. He had turned that place around and is getting rid of the corruption there. Photo credit goes to the famous paramedic Tim Collins, Somerset County EMS god.

He looks like he is missing his white shadow.

I guess to fix corruption, you have to know where it starts. The fire chief however leaves his patrol duties to go to fire calls when he is the only officer on duty in town. Thats re-assuring for us citizens. He requests that state police or the sheriffs dept answer calls which increases response time when we citizens may need it most. Just because you may display a good track record doesn't mean you don't have your own demons or lack of duty. It takes a lot of fortitude to leave a fellow officer to search for a possible murderer alone.

The big question is why? What cop post this type of picture and referencing God at the same time??? One thing i do know is a couple of the P.A. Officers have longer rap sheets than the people they arrest. One has not one but two DWI s on record. WTF Chief having trouble finding people. The guy in the shot is a good person I just think this was bad all the way around.

Are he and Tim dating just wondering.