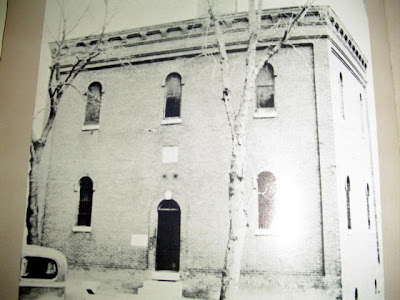 
Back in 1936, it was determined that the old jail behind the Wicomico County Courthouse was not adequate and a new one was needed. The first phase entailed razing the old jail. As is proper with government projects, the job was put out for bids.

On the day the sealed bids were opened, they first opened the one for building the addition to the court house. This went to another contractor, a good friend of my grandfather’s. He was William Bounds who lived on E. William Street and had been mayor of Salisbury twice, from 1910-12 and again from 1914-16. His daughter, Louise, was a good friend of my mother and remained so for the rest of their lives. In fact, she and her family lived only two doors from where I live now. That is really small town for you. If you go back far enough, everybody is connected in some way or another. When they opened the envelopes for the bids to tear down the two-story structure behind the court house, my grandfather’s bid was substantially lower than anyone else’s. When questioned by his peers as to how he could do the job at such a low cost, he replied that it wouldn’t cost that much to just dynamite the old jail and haul the rubble away. At that point, he was told he had really made a serious mistake because it was illegal to set off dynamite within the city limits. They told him it would cost him far more than his bid to bring in a crew with sledge hammers and raze the old jail. He just shrugged and said nothing.

Late the following Sunday night a great explosion was heard in downtown Salisbury. The following morning found him standing in front of the Clerk of Court with $25 in his hand. When asked what the money was for, he told the clerk that it was for the maximum amount he could be fined for setting off dynamite within the city limits according to the City Charter. He then proceeded to help with shoveling the rubble into dump trucks and clearing the space where the new jail was to be erected. Needless to say, his costs were well under his estimate. I guess reading the Charter produced good results even 75 years ago.

George, That is a real classic! You have outdone yourself. Thanks,
kts

OMG what a great story George started my day off with a hearty laugh!

Many of us are ready for your assistance in ridding this good city of the cancerous Jeff Simpson. This guy has wasted more money and ruined the careers of numerous volunteers and career personnel. The city deserves much better!

Love the picture and the story!

Very interesting story. Wasn't this demolition something like the one done at the Jackson house on Camden, where the St. Francis rectory now stands?

As for reading the city's Charter, touche', George.

LOL He showed them, huh?

George, $25.00 fine for the one charge , if it was in this day and age he would be charged with terroristic use of explosives , endangering life and on and on.
I love your post ,
Your friend , Wayne

Wish I could have met him George. I like his style !!!