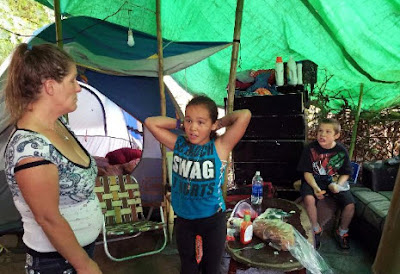 Just like during the last economic crisis, homeless encampments are popping up all over the nation as poverty grows at a very alarming rate. According to the Department of Housing and Urban Development, more than half a million people are homeless in America right now, but that figure is increasing by the day. And it isn’t just adults that we are talking about. It has been reported that that the number of homeless children in this country has risen by 60 percent since the last recession, and Poverty USA says that a total of 1.6 million children slept either in a homeless shelter or in some other form of emergency housing at some point last year. Yes, the stock market may have been experiencing a temporary boom for the last couple of years, but for those on the low end of the economic scale things have just continued to deteriorate.

Tonight, countless numbers of homeless people will try to make it through another chilly night in large tent cities that have been established in the heart of major cities such as Seattle, Washington, D.C. and St. Louis. Homelessness has gotten so bad in California that the L.A. City Council has formally asked Governor Jerry Brown to officially declare a state of emergency. And in Portland the city has extended their “homeless emergency” for yet another year, and city officials are really struggling with how to deal with the booming tent cities that have sprung up…

Everybody needs a place to live and food to eat. And a job. So far, all that's been done is to throw money after the problem, with dollar sucking corruption along the way.

"Its the economy stupid"

And the White House wants to bring in 110K refugees into the US in 2017. Unbelievable!!

Thank you 12:51 lets take care of our homeless population first. I can't imagine have a child and being homeless with no hope in sight. Lets stop tearing down homes and businesses that have been seized for what ever reason and make them homes for the homeless families.

The sad thing is the funding that does ever get allocated never makes it past the greedy bureaucrats and their cronies. The continue to get extremely wealthy of your tax dollars

Billions are being spent in a presidential election. I'm to broke to help.

Motels in the area and full of homeless people. Halo is always busy and crowded. At our church we have food drives every week and its always busy. Things are not getting any better out there!

That woman could sell sex and get a place for her and the kids. Here in Slumsbury we have lots of people living in local hotel rooms, paying for them with sex.

The best way to help a homeless person is to help them personally.
Personally help them. Don't give money / items to a fund or a corporate entity. Help a person.

Simple. Walk up to him / her and provide some help.
It will be greatly appreciated.

The best way to help a homeless person is to teach them a skill. Bible says don't work you don't eat. The problem is 99.9 percent of them have substance abuse problems and this is why they are homeless. I know myself I'll never be in that position but if I were I have family and friends who I could rely on. These people have burned all those bridges because of substance abuse. They steal from family and friends, use them, lie and manipulate until they are told to get out. You give them a bag of food, they know right who to take it to who will pay them 5 or 10 dollars for the bag worth $20. There is a lot of enabling going on because some feel by "helping" they are building their own stairway to heaven. But again the Bible says "don't work don't eat" so you are really sinning by not helping the person to help themselves before handing something over to them.

Homelessness is a way for democrats to create jobs. If homelessness (like drug addiction) was to sudden go away the economy would collapse. Too many now rely on homeless people for their own livelihood.

Growing up in the 80's in a suburb of Baltimore we had this neighbor who knew all the angles. He did spend time in fed prison and I think the state system too. Anyway he was the guy they came to to sell their cheese they got for free and their free boxes of food. He would give them pennies of what the food was worth. My aunt volunteered at her church's food pantry and they had to get together with other area churches because the people were hitting up all the places giving away free things and were selling them. Some around here do that and sell at the flea markets.

Can the liberal democrat come here and explain how much better our country is after 8 years of this monkey pretender running the show?
20 TRILLION in debt. Cities in ruins. Respect for authority and the rule of law in shambles. Our military getting captured and paraded around. Third world countries openly challenging and THREATENING us. A government sold to the highest bidder.
Start thinking about what the hell you're cheering for.....

As someone who volunteers time at church to help the homeless, not all homeless people are drug addicts or freeloaders or bums! There are many out there working, but they are not making enough to afford an apartment or place to live. Some of them were former middle and upper middle class before this great recession started. Some are young people who are working minimum wage jobs and just cannot afford the cost of housing, so they have no where else to turn.
Some live in motels and have very little left for food so they come for the food drives. Try volunteering for once at a church or homeless shelter. You will be shocked who the new homeless are! Yes there are still bums, and drug addicts, but there are also decent people out there who have become homeless due to no fault of there own. We need to help these people. Its not a hand out, but a hand up! Also I am not a liberal, but I am a christian, and a Trump supporter!